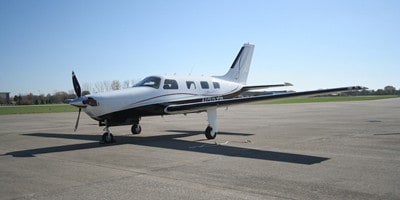 The Piper Matrix is a single turbocharged engine, non-pressurized, produced by Piper from 2008 until 2016. Model PA46R-350T seats up to 5 passengers and 1 pilot.

In October 2007 Piper announced the Matrix, an unpressurized version of the PA46-350P Malibu Mirage. The new model has been designated as the PA-46R-350T, indicating retractable landing gear, 350 horsepower, and turbocharging.

Piper Aircraft is marketing the Matrix as a cabin-class aircraft for Cirrus SR-22 and Cessna 400 owners to step up to. With the Matrix's luxurious six-place cabin, club seating, airstair door and it's big plane look and feel, it's easy to see why owners would want a Matrix over the Cirrus or Cessna.

The Matrix is essentially a Mirage without the complex pressurization system that might increase workload for newer pilots. Removing all of the pressurization hardware from the airframe bumped up the useful load up to 1421 pounds, while fuel capacity remains the same. Because the cabin isn't pressurized, Piper saved money and weight by installing thinner Plexiglass. There's not as much glass in the Matrix because the airframe was designed for pressurization.

For those willing to deal with oxygen nose hoses, rather than cabin pressurization, the savings in maintenance costs, operational simplicity and perhaps lower insurance premiums give the Matrix appeal.

On the ramp, the Matrix is impressive. It sits high on its beefy, retractable landing gear, and the two-section airstair door keeps passengers from having to climb up on a wing to get into the airplane. It's easy to open and close, and plenty big enough to allow easy loading of passengers and bags. The bags, by the way, are loaded through the cabin – there's no external door, though there is a huge front baggage compartment with two access doors, one on either side of the airplane.

In the cabin there's a little less structure, as the emergency oxygen system needed in the pressurized airplanes is gone, so there's a new space between the rear facing and pilot's/copilot's seats to toss charts or bags or jackets. Up front you're reminded, once again, that you're in a different class of airplane. There's plenty of room in the cabin, however, the access and headroom for very tall pilots is somewhat limited. Piper addressed this by using lower-profile, high-density foam seat cushions which are very comfortable.

The layout of the panel is extremely nice with an overhead switch panel as in larger aircraft and jets with another subpanel just to the right of the MFD for anti-icing and environmental controls.

Pilots of smaller, four-place aircraft should have no trouble transitioning to avionics and performance of the Piper Matrix.