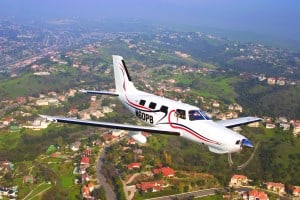 The Piper Malibu is a single turbocharged engine, non-pressurized, produced by Piper from 1984 until 1988. Model PA46-310P seats up to 5 passengers and 1 pilot.

The Piper PA-46 Malibu and Matrix are a family of American light aircraft manufactured by Piper Aircraft of Vero Beach, Florida. Early Malibus were all piston-engined, but a turboprop version, introduced as the Malibu Meridian but now called the M500, is also available. Currently, Piper offers the M350, M500, and M600 in the PA-46 family.

The PA-46 was the third single-engined piston aircraft with a pressurized cabin to reach the market, after the Mooney M22 and Cessna P210 Centurion, and the only one still in production.

Work on the PA-46 began in the late 1970s, with a prototype (the PA-46-300T) first flying on November 30, 1979. The type was announced in November 1982, apparently to compete with Cessna's newest creation of the era, the P210 Centurion. Like the Centurion, the Malibu was to feature cabin pressurization 5.5 psi, a feature not included on the prototype.

The first example of the initial production version flew in August 1982, and FAA certification was obtained in September 1983. Deliveries started two months later. 404 aircraft with Continental TSIO-520 engines were built before this model was replaced in production by the PA-46-350P Malibu Mirage.

The Continental TSIO-520-BE powered Malibu was discontinued in 1988 following a series of incidents and accidents attributed to engine failures. One such accident resulted in a settlement in which Teledyne Continental Motors paid $32,125,000 to a pilot injured in the crash of a Malibu.