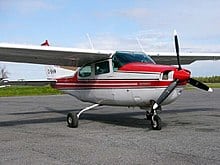 The Cessna T210 Turbo Centurion is a six seat, single-engine, piston aircraft configured as a cantilever high-wing aircraft with a conventional tail. It features retractable gear and a constant-speed propeller. It seats up to 5 passengers and a pilot.

In 1966, Cessna added an optional turbo charger to the 210 fleet. It became known as a Turbo 210 or T210, therefore, adding a new dimension to the Centurion by enabling it to climb over weather and mountainous terrain. It became the new all around aircraft for cross-country IFR travel.

Everything changed in 1967 with model G when Cessna redesigned the cabin to accommodate a new cantilever, laminar flow wing which eliminated the wing struts. The wing was placed 4 in aft of the previous wing which gave improved visibility. Engineers gave it a 3-degree dihedral which made it more stable in slow flight. The aircraft was easily identified with the unusual angle of the strutless wings.

This was also the first year of the wet wing. Inside the wing were two internal and sealed 45 gallon fuel tanks. Prior models tanks were flexible rubber bladders. Maximum take-off weight was increased to 3400 lbs.

By 1970 the 210K became the first full six-seat model. This was achieved by replacing the flat leaf-springs used for the retractable main landing gear struts (undercarriage) with tapered tubular steel struts of greater length and width. This wider stance allowed the tires to be nested farther to the rear of the fuselage and increased cabin width enough for the full-size rear seats, instead of child seats. A larger baggage area and door was placed behind the rear seats. The two rear side windows were combined into one long window allowing passengers an improved view and gave the aircraft a more attractive appearance.

New gear legs provided an additional six inches of tread and allowed the maximum take-off weight to increased again to 3800 lbs. This gave the aircraft a useful load of over 1500 lbs. With 90 gallons of fuel now standard, the Centurion had become a leader in the high-performance single class. As John Frank, a noted Cessna 210 expert, wrote about the 1970 Cessna 210K, “No popular single-engine airplane could carry a greater payload a farther distance at a faster speed than the Cessna 210 Centurion.”

An upgraded electrical system with 28 volts came in 1972. The landing gear extension/retraction system was changed from an engine driven hydraulic pump to a power-pack mounted and electrically powered system. The engine driven system had been in place since 1962. You can read more about the landing gear system on the Cessna Flyer page here.

The 1977 M model saw an engine change to the TSIO-520-R engine boosting the power an additional 25 hp to 310 hp (2700 RPM with a 5 minute limit). Take-off and climb performance was noticeably improved and became a popular upgrade for the earlier T210 models via an STC held by RAM Aircraft of Waco, TX.

In 1979 the 210N model eliminated the folding doors which previously covered the two retracted main wheels. The tubular spring struts retract into shallow channels along the bottom of the fuselage and the wheels fit snugly in closed depressions on the underside of the fuselage leaving exposed cavities when the gear is extended.

Maximum take-off weight increased again to 4000 lbs. This model and the pressurized version were the first single engine aircraft to feature de-icing boots as an option.

The final upgrade for the 210 was the model 210R/T210R in 1985. The wingspan was extended by two feet to 38 feet, 10 inches (which made it a tight fit for a 40-foot-wide hangar door) and an additional three feet was added to the horizontal stabilizer. Landing gear extension speed was upped to a whopping 165 knots, and there was an option to up the fuel capacity by an additional 30 gallons to 115 usable.

Ultimately, when Cessna restarted producing propeller airplanes in 1996 the offerings were limited to fixed-gear single engine airplanes. No retractable gear singles nor twins are in Cessna’s future.

On May 21, 2012 the airworthiness authority responsible for the design, the US Federal Aviation Administration, issued an emergency Airworthiness Directive requiring 3,665 of the cantilever wing Cessna 210s to be inspected for cracks in the spar cap, wing spar and wing. Aircraft with more than 10,000 hours of airframe time were grounded immediately pending a visual inspection.

On May 16, 2019, a Cessna Model T210M airplane suffered an in-flight separation of the right wing. Preliminary investigations found cracking of the wing-spar carry-thru where fatigue began from a small corrosion pit on the lower surface of the carry-thru. Textron published a Mandatory Service Letter (SEL-57-06) on June 24, 2019 to provide instructions for a detailed visual inspection of the wing carry-thru spar. The FAA issued an Airworthiness Directive on February 24, 2020 mandating eddy current inspections of the carry-thru spar lower cap, corrective action if necessary, application of a protective coating and corrosion inhibiting compound, and reporting the inspection results to the FAA. Since it shared a common carry-thru design, the Cessna 177 Cardinal also received a similar Mandatory Service Letter (SELF-57-07) and an airworthiness concern from the FAA.

A 210F with a strutless cantilever wing and modified rear window, increased takeoff weight to 3,400 lb, introduced in 1967, 228 built.

A 210K with nose-mounted landing lights, the electrical system changed to 24 volt, the engine-driven hydraulic pump replaced with an electrical pump and a three-bladed prop fitted. Improved aerodynamics led to an increase in approximately 8 kts in cruise speed. Produced 1972-76, 2070 built.

A 210M with open wheel wells for main landing gear and minor changes. Although this change appeared only on the C210N, most early models have had gear doors removed due to extensive maintenance and handling problems, leaving them similar to the “N”. Produced 1981-84, 1943 built.

FindAircraft.com is Aviation's Largest and Most Trusted Aircraft for Sale search engine! Search for all the available Cessna T210 for Sale now!