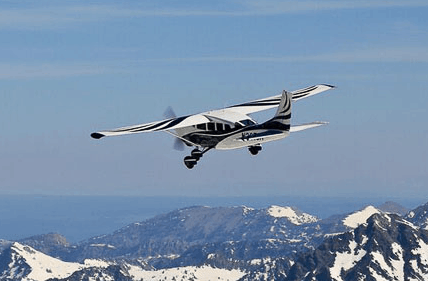 The Cessna T207 is a single-engine aircraft configured as a cantilever high-wing aircraft with a conventional tail and steerable nose wheel. It features tricycle, fixed gear and a constant-speed propeller. It seats up to 7 passengers and a pilot.

The Model 207 was a seven- and later eight-seat aircraft, achieved by stretching the fuselage of the Model 206 by 45 inches to allow space for more seats and 4 side passenger windows. The nose section was extended 18 inches by adding a nose baggage compartment between the passenger compartment and the engine firewall; the aft section was extended by 27 inches by inserting a section in the fuselage area just aft of the aft wing attach point.

Thus the propeller's ground clearance was unaffected by the change (the nosewheel had moved forward the same distance as the propeller), but the tail moved aft relative to the mainwheel position, which made landing (without striking the tailskid on the runway) a greater challenge. The move gave that airplane a larger turning radius, since the distance between mainwheels and nosewheel increased by 18 inches but the nosewheel's maximum allowed deflection was not increased.

The Cessna Model 207 has been popular with air taxi companies, particularly on short runs where its full seating capacity could be used. Very few of these aircraft have seen private use.

Model 207 handles much like a Skyhawk or Skylane, and in some ways easier to fly. The larger aircraft is more immune to turbulence. The flap configuration makes slow speed handling better than on the smaller models. This sport-utility model lands in less than 1000 ft and is at home both on paved and rural strips.

Performance is not too bad at 16-17 gal/hr and the Turbo model will yield true airspeeds of 130 kts at lower altitude and up to 150 kts up high.