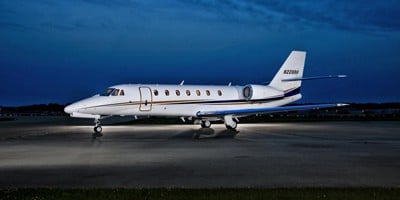 The Cessna Citation Sovereign Model 680 series is a midsize business jet produced by Cessna from 2004 until current. The Model 680 is a 3,200 nmi range business jet developed by Cessna, part of the Cessna Citation family. The Citation Excel fuselage was stretched and joined with an all-new, larger wing and more powerful Pratt & Whitney Canada PW306C engines for increased maximum takeoff weight. It seats up to 10 passengers and 2 pilots.

Honeywell Epic Integrated Avionics, 2013 and up are equipped with Garmin G5000

Announced at the 1998 NBAA convention, it made its maiden flight in February 2002, certification was awarded on June 2, 2004, and deliveries began in late September. The improved Sovereign+ was announced at the October 2012 NBAA for a first flight in April 2012 and deliveries in December, with added winglets and an improved flight deck and engines.

In the late 1990s, Cessna wanted to fill a gap in its midsize line-up as demand for its Cessna Citation III/VI/VII waned, with greater cabin comfort, performance and utility than its concurrence but with Citation reliability, a high aerodynamic lift wing for runway performance, and near transcontinental flight range to compete with the Hawker 800, a thrust-to-weight ratio to rival the climb performance of the Learjet 60.

It was announced at the 1998 NBAA convention, it made its maiden flight in February 2002 and deliveries began in late September 2004. FAA certification was awarded on June 2, 2004. EASA certification came on 31 March 2005.

The improved Sovereign+ was announced at the October 2012 NBAA, it rolled out in early March 2013, first flew in April, and began deliveries on December 23 after certification, at a time when the Sovereign fleet reached 349 and had flown 802,000 hours. Winglets were for more range of 150 to 3,000 nmi, new PW306D engines with autothrottles provides 5,852 lbf of thrust for a 458 kn top speed and a FL450 direct climb, full fuel payload was increased and the Garmin G5000 replaces the avionics.

The Citation Excel fuselage was stretched for a 6.6 ft (2.0 m) longer cabin and joined with a large, newly-designed 515.9 sq ft (47.93 m2) wing with large trailing edge flaps for good runway performance, with 16.3° wing sweep and a relatively high critical Mach number for efficient 445 kn (824 km/h) TAS cruise. It is powered by 5,770 lbf (25.7 kN) Pratt & Whitney Canada PW306C engines, derated from the Gulfstream G200 or Do 328JET, and uses Honeywell Primus Epic glass cockpit avionics with four LCD screens. The cabin maintains a 7,200 ft (2,200 m) altitude with the 9.3 psi (0.64 bar) pressurization and typically comprise double-club seating for eight, two more than the Gulfstream G150, plus a side facing seat, and can accommodate up to 11.

The Citation Sovereign and Sovereign+ has the longest and most spacious cabin in the traditional mid-size jet market. The aircraft fuselage is an elongated version, which is 6.6 feet longer, than the Citation Excel. The aircraft also has a large, clean-sheet design 515 square foot wing with large trailing-edge flaps. With excellent short-field performance, both the Sovereign and Sovereign+ can easily operate out of 4,000 foot runways. In addition, this airframe includes trailing link landing gear, which allows for softer landings and taxiing.

In conclusion, the Citation Sovereign and Soverign+ are in a class all their own. They outperform all mid-sized jets, and even many super mids. They have an outstanding range and can operate out of short-fields while delivering cabin comfort and spacious baggage capacity. With excellent performance, a large cabin, and low operating costs, the Citation Sovereign and Sovereign+ are an excellent option for operators looking to step up to a transcontinental aircraft.

Click here to read more about the Sovereign and Sovereign+ at ElliottJets.