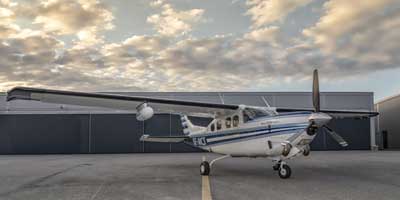 The Cessna P210 Pressurized Centurion is a six seat, single-engine, piston aircraft configured as a cantilever high-wing aircraft with a conventional tail. It is pressurized and features retractable gear and a constant-speed propeller. It seats up to 5 passengers and a pilot.

The aircraft was offered in a normally aspirated version, designated the model 210, as well as the turbocharged T210 and the pressurized P210 versions. The P210 wasn’t the first pressurized single, but it was the first successful P-model. Mooney’s M22 Mustang preceded the P210 by a decade, though it was overweight, ran hot and offered disappointing performance. Mooney shelved the Mustang after only three years of production.

The Cessna P210 was modeled after the Pressurized Skymaster with the 3.35 psi system. The P210 weighs about 180 lbs heavier than the T210. You can read more about the concept of pressurization here at Tennessee Aircraft Services. Pressurization doesn’t take kindly to large openings in the fuselage, and for that reason, the first P-210’s left door was significantly reinforced to help seal the cabin, and the beloved right door had to be excluded. To satisfy the FAA’s requirement for two exits on any six-place airplane, Cessna mounted a half-door emergency exit that folded up against the bottom of the wing. (Interestingly, rather than mount a second door on the P-Skymaster, Cessna chose to limit the airplane to five seats.)

The first Pressurized 210 model came out in 1978 and was called the P210N, however, it was actually a model 210M since it shared all the systems of the non-pressurized model 210M including the landing gear system. Anytime you see a P210 with main gear doors or a Uvalde door mod, you know it must only be a 1978 year model.

In 1979 the P210N had all of the upgrades in the non-pressurized N models, including the simpler gear system minus the main gear doors. This cost some of the original 196 kt cruise speed and a little climb rate, however, the gear extension speed became a good speed brake. Maximum take-off weight on the N models is 4000 lbs. They came equipped with a Continental TSIO-520-P 285 hp with 310 hp rating on take-off and a 1600 hr TBO.

Problems arose in 1980 when a pair of P210 crashed due to engine failure caused by detonation. The FAA issued an emergency AD calling for extra-rich mixtures to cool the engines. The detonation apparently was caused by a poorly matched engine-turbocharger combination causing high back pressure on the exhaust and hot induction air temps.

The situation was remedied by Cessna in 1981 to retrofit all P210's with a new turbocharger at Cessna's cost. A later AD made it mandatory. This retrofit was intended to eliminate the need for ultra-rich mixtures, however, it lowered performance to the degree that pilots couldn't hold manifold pressure above 16,000 ft.

Later in 1981, Cessna added a new air induction system that would restore the lost performance. This consisted of a larger intake scoop and air plenum which increased manifold pressure up to seven inches at altitude.

In 1982 many improvements were made to make these planes more desirable. Cessna added a new ‘slope' turbo controller which maintains pressure to a steady two inches above manifold pressure, thereby, eliminating much of the load on the turbo. The old controller was an economy measure that held a constant pressure of 35 inches even when the engine only needed 25.

The 1982 P210 was equipped with a new fuel system with two important features: vapor-return lines and left-right-both fuel tank selector system reducing fuel mismanagement. The engine was changed to the TSIO-520-AF (285 hp w/310 hp on take-off )which modified the valve, ring and valve guides. Other changes were; dual vacuum pumps and alternators became options; cowl flaps were improved to prevent overcooling on descent; a TIT (turbine inlet temp) gauge; along with a restriction of 1650 degrees TIT to limit lean and keep exhaust temps down.

Competition from Piper's Malibu required Cessna to revise the P210 in order to compete. The revised version would become a less expensive, highly capable alternative.

In 1985 the Cessna P210R was built with a more powerful 325 hp Continental TSIO-520-CE engine and intercooler as standard. This combination provided better performance and increased longevity. Along with the engine improvements came airframe upgrades such as longer wings and 3 ft wider horizontal stabilizer.

The two extra feet of wing length and almost 10 ft of wing area allowed an extra 30 gallons of fuel in the wings and helped climb performance. Max cruise was boosted to 213 kts which is more than 20 kts faster than earlier models. Changes in the tail configuration made pitch forces lighter, so pilots could manage take-off flare, steep turns and landing flares with one hand.

Empty weight didn't increase but the R models benefitted from a 4100 lb gross weight increase. The new airplane had a service ceiling of 25,000 feet. Since pressurization remained at 3.35 psi, pilots and crew would have needed supplemental oxygen, as the cabin would have been above 12,500 feet. Many 210 lovers regard the P210R as the best of the type.

In conclusion, the P210R is the preferred model in the pressurized 210 market, however, as expected, commands almost 100k thousand more in price as compared to earlier models.

The 210N, T210N (turbocharged), and P210N (pressurized) versions were produced in the greatest quantity. The rarest and most expensive models were the T210R and P210R, which were produced only in small quantities in 1985-86.