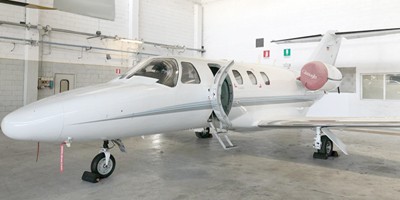 The Cessna CitationJet 525 M2/CJ series are a light twin-turbofan business jet produced by Cessna from 1993 until current day (CJ1 since 2000).  Developed as replacement of the CESSNA 500 Citation 1 with shorter fuselage, super critical wings and T-tail. Combines jet speed with very good field performance. Was replaced by CJ1 in 2000 (FAA certification in February and first delivery in March). Model 525 seats up to 6 passengers and 2 pilots.

The Cessna CitationJet/M2/CJ series (Model 525) are light business jets built by Cessna and part of the Citation family. Launched in October 1989, its first flight was on April 29, 1991, FAA certification was awarded on October 16, 1992, first delivery happened on March 30, 1993, and by June 2017, 2,000 of all variants have been delivered. Powered by two 1,900 lbf Williams FJ44s, it uses the Citation II's forward fuselage with a new carry-through section, straight wing, and T-tail. The basic model was updated with the CJ/CJ1/M2 names, it was stretched in the CJ2/CJ2+ delivered since 2000, then further in the CJ3/CJ3+ delivered from December 2004 and finally in the CJ4 delivered since 2010.

Cessna launched the $2.4 million model 525 CitationJet at the October 1989 NBAA convention in Atlanta, estimating a demand for 1,000 aircraft over ten years. Succeeding the 700 original Citation Is produced since 1972, first flight was scheduled for spring 1991, FAA certification in October 1992 and deliveries by the end of the year.

The six-seat CitationJet is a cantilever monoplane with retractable tricycle landing gear and a pressurized cabin.

The jet uses the Citation II's forward fuselage, a new carry-through section, a new laminar flow, supercritical wing developed with NASA and Boeing, and a T-tail. Powered by two 1,900 lbf Williams FJ44s, the 10,000 lb aircraft has a trailing link undercarriage for smooth landings and can be flown by a single pilot. Cabin length is reduced by 1 ft 6 in, range is 1,500 nmi with four passengers and it can cruise at 437 mph.

Its FJ44 has a 16:1 overall pressure ratio, its wing area is 240 sq ft and it can cruise at Mach 0.7. It features EFIS avionics, its fuselage is 11 inches (27 cm) shorter than the Citation I's, but has a lowered center aisle for increased cabin height.

The CitationJet retains the 58 in inside diameter, circular cross-section fuselage of the original 1971 Citation 500, a semi-monocoque construction of conventional aluminum alloys assembled with rivets, fasteners and adhesive bonding. Composite materials save weight in non-load-bearing components including fairings and the nose radome. The NASA high-speed 0213 airfoil sustains natural laminar flow over 30% of the upper surface for 10-15% better lift-to-drag than the larger NACA 23000-series wing of the Citation 500. Its structure is a conventional ladder with chord-wise ribs over front and rear spars, and an aft sub spar to support the landing gear. To reduce interference drag, a large fairing encases the low wing center section, and the engines are mounted high on the tail. The Williams FJ44 has a 2.58:1 bypass ratio.

Model 525 serial numbers 0360 to 0599 are marketed as the CitationJet CJ1 and are powered by the same Williams FJ44-1A. It was improved with a more-modern EFIS avionics suite and a moderate increase in maximum takeoff weight.

Model 525 serial number 0600 and higher are marketed as CitationJet CJ1+ and are powered by Williams FJ44-1AP turbofans. With the same airframe, it has an updated avionics package and FADEC engine control.

Model 525 marketed as Cessna Citation M2 are powered by improved FJ44-1AP-21 turbofans offering 10 to 15% more cruise thrust and up to 5% more hot-and-high thrust, and are equipped with modern Garmin G3000 avionics replacing Rockwell Collins Pro Line 21. Launched in September 2011, it is based on the then out-of-production CJ1 variant and features a new cabin layout and a more efficient FJ44 version. The initial M2 prototype first flew on 9 March 2012, it was not a conforming airframe but was testing the Garmin G3000 avionics and Williams FJ44-1AP-21 turbofans while one another aircraft was expected to join the certification program in May 2012 to be used for aerodynamics testing.

Model 525A serial numbers 0300 and higher, marketed as the CitationJet CJ2+ and first delivered in April 2006, offer increased performance with updated avionics and Williams FJ44-3A-24 turbofans with FADEC control. In 2014, Cessna started offering an upgrade package for the CJ2+ called Alpine Edition. It incorporates Garmin G3000 avionics and new cabin stylings similar to those introduced by Cessna to the CJ1+ when it became the M2. The CJ2 went out of production due to low demand in January 2016.

Model 525B are marketed as the CitationJet CJ3 are a further stretch of the CJ2 powered by Williams FJ44-3A turbofans. Unveiled at the September 2002 National Business Aviation Association convention, it first flew on April 17, 2003, was FAA certified in October 2004 and deliveries began in December of that year. The cockpit with Rockwell Collins avionics is designed for single-pilot operation but can accommodate two crew members. Its customizable cabin typically has six club seats in a center-style configuration with an accessible in flight baggage compartment and external baggage access.

The stretched CJ4 was launched at the October 2006 NBAA conference. Its wing design comes from the moderately swept wing of the Citation Sovereign. Powered by Williams FJ44-4A turbofans, it has a maximum range of 2,165 nmi. Its cabin is 21 inches longer than the CJ3 and can seat up to nine people plus one in the cockpit. It first lifted off on May 5, 2008, from McConnell AFB in Wichita, Kansas and first deliveries started in 2010.

In 2011, the Federal Aviation Administration temporarily grounded the CJ4 and issued an airworthiness directive because of fires in the original Lithium-ion battery equipment. The cabin is pressurized at 9.0 psi and the seating area is 7 in longer than in the CJ3, with a typical forward side-facing divan followed by a four chairs club and two forward facing chairs. It can carry a 987 lb payload with full fuel, cruise up to FL450 and takeoff from 3,410 ft field on a standard day. Block speeds are 410–420 kn and it burns 160 US gal of fuel per hour. Maintenance is $269 per hour for labor and $370 per hour for parts excluding the engine maintenance plan is $317 per hour for a 5,000 h TBO. By June 2019, early models are $5.5-5.8 million for resale and up to over $7 million for later ones. The CJ3+ offers almost as much range, but carries fewer passengers with full tanks and is slower, while the Embraer Phenom 300 has better fuel efficiency and more tanks-full payload. The 300th CJ4 was delivered in June 2019.