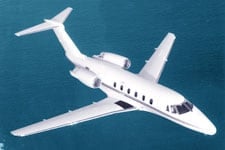 The Cessna Citation VI model 650 series is a midsize business jet produced by Cessna from 1991 until 1995. The Citation VI was a cheaper version of the Citation III and had a standard double-club interior which seats up to 8 passengers and 2 pilots.

The Citation VI is one of the updates for the Citation III; it is more economical both in acquisition cost and hourly operating cost.

One of the best features of the Citation VI is that it is fast. It was designed for optimal speed; the body utilizes lightweight composites wherever possible and smooth, bonded metal surfaces to cut down on drag. It climbs quickly to its flight level of 43,000 feet, where it can cruise at a maximum speed of .81 to .83 Mach (468 knots). Its maximum range with four passengers is 2,920 miles (2,054 nautical miles). The Citation VI has the longest range and fastest overall cruise speed of any midsized jet.

The Honeywell digital SPZ-8000 autopilot flight control system comes standard in Citation VIs. It includes many safety checkup systems that are uncomplicated, where checking the status of many vital flight systems is literally as easy as pressing a button. The Citation VI is certified to FAR part 25 safety standards, the same standards that commercial jets must adhere to. Unlike the digital autopilot of the Citation III, the Citation VI uses an analog version to cut cost and weight.