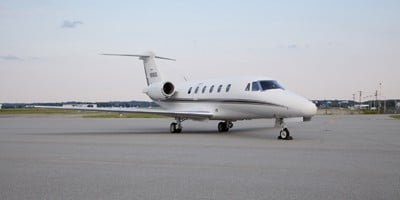 The Cessna Citation III model 650 series is a midsize business jet produced by Cessna from 1983 until 1991. Distinguishing features of the Model 650 are an entirely new fuselage mated to a super-critical swept-back wing and T-tail. It seats up to 8 passengers and 2 pilots.

In 1974, Cessna studied a long range model 700 stretch of its original Citation I powered by three JT15Ds called Citation III, with a 17,500 lb gross weight, an 8,000 lb empty weight and a 7,500 lb fuel capacity leaving 2,000 lb for the occupants, and targeting 1978 deliveries. This would have gave it a transcontinental range.

Cessna announced the 10 to 15 passengers, $2.5 million Citation III at the Fall 1976 NBAA convention. Scheduled for 1980, the model then presented had a cruciform tail and a cockpit similar to previous Citations. As the proposed three-engined Models 600 and 700 timing was inadequate, it would be powered by two TFE731 and would be lifted by a supercritical 35° swept wing. Its maximum cruise was targeted for 470kn, the long-range version had a 19,300lb gross weight and would cover 3,000 nmi. The program was to cost up to $50 million to launch.

The second prototype first flew in April 1980. By July, certification was put back by six months and first deliveries were scheduled 11 months later than originally planned. $40 million were spent on R&D and $25 million for certification, for a total spending of $150 million by first delivery including tooling. By October, the two prototypes had logged 400 hours in 372 flights and FAR-25 certification was expected in April 1982 with first deliveries in October. The initial late 1982 production rate of one per month should grow to seven per month by 1985.

The FAA approved its type certificate on April 30, 1982. The aircraft is flown by a crew of two and it can seat up to 13 passengers but a typical corporate interior will seat six to eight passengers.