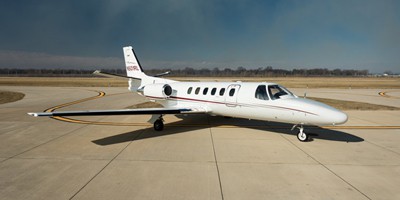 The Cessna Citation II model 550 series is a light twin-turbofan business jet produced by Cessna from 1978 until 2006.  Model 550 seats up to 9 passengers and 2 pilots.

The Cessna Citation II (Model 550) series of Citation jets are light corporate jets built by Cessna. Stretched from the Citation I, it was announced in September 1976, first flew on January 31, 1977 was certified in March 1978. The II/SP is a single pilot version, the improved S/II first flew on February 14, 1984 and the Citation Bravo upgraded with new avionics and P&WC PW530A turbofans on April 25, 1995, while the United States used it as the T-47. Production ceased in 2006 after 1184 were delivered.

The improved Citation S/II (Model S550) was announced in October 1983 and first flew on February 14, 1984, before certification in July. It gained a supercritical airfoil developed for the Citation III and JT15D4B turbofans. It replaced the II from 1984, but the II resumed production from late 1985, and both were built until the Bravo introduction. Deliveries of the S/II amount to 160.

Model 550 is a larger stretched development of the Model 500 first produced in 1978. Initially replaced by the S/II in production, but was brought back and produced side-by-side with the S/II until the Bravo was introduced.

Model 552 is the military designation of the Citation II. The United States Navy purchased 15 T-47A aircraft as radar system trainers.

Model 551 is certified for single-pilot operations.

Model S550 incorporated a number of improvements, especially an improved wing. Replaced the II in production.[2][10]