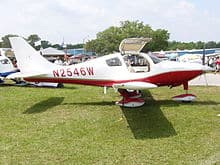 View All Cessna 350 Aircraft For Sale

The Cessna 350 is single engine, fixed gear, low-wing, aircraft built from composite materials by Cessna Aircraft. The Cessna 350 was originally built by Columbia Aircraft as the Columbia 350 between 2003 and 2011 when it was discontinued. It seats up to 3 passengers and 1 pilot.

The Columbia 300 was upgraded with a glass cockpit and other improvements developed for the turbocharged Columbia 400. It was certified on March 30, 2003 as the Model LC42-550FG (for Lancair Certified, Model 42, Continental 550 engine, Fixed Gear) and marketed as the Columbia 350.

Initially sold simply as the Cessna 350, the aircraft was given the marketing name Corvalis by Cessna on 14 January 2009. The name is a derivation of the town of Corvallis, Oregon which is west of the Bend, Oregon location of the Cessna plant that built the aircraft, prior to closing the plant and relocating production to Independence, Kansas in 2009.[3][7][8][9]

In April 2009 Cessna announced that it would close the Bend, Oregon factory where the Cessna 350 was produced and move production to Independence, Kansas, with the composite construction moved to Mexico. The production line was restarted in October 2009 at the Cessna Independence paint facility, initially at a rate of one aircraft in six months. This was to allow the new workers, plus the 30 employees transferred from Bend, to gain experience and also allow Cessna the opportunity to retail its unsold inventory of Cessna 350s and 400s. The company had anticipated moving the 350/400 production into a permanent facility by the end of 2009.[8][10]

In December 2010 a Cessna 400 that was being test flown at the factory developed a fuel leak, the cause of which was determined to be that the aircraft had “suffered a significant structural failure in the wing during a production acceptance flight test. The wing skin disbonded from the upper forward wing spar. The length of the disbond was approximately 7 feet.” As a result, the FAA issued an Emergency Airworthiness Directive affecting seven Cessna 400s and one 350, all on the production line. The AD did not affect any customer aircraft in service, but did delay deliveries.[11][12]

In March 2011 Cessna announced that the model was out of production and removed marketing information from its website.