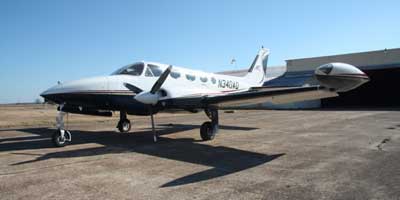 View All Cessna 340 Aircraft For Sale

The Cessna 340 is a six seat, low-wing, twin piston engine aircraft with a conventional tail produced by Cessna from 1972 until 1984. Distinguishing features are: pressurization, retractable gear and constant-speed propellers. Model 340 seats up to 5 passengers and 1 pilot.

Cessna had a great thirty-year run with the Cessna 310 twin. And less than twenty years after the first flight of the 310, Cessna had dreams of introducing the first pressurized light twin based loosely on the 310. This would become the Cessna 340. While Beechcraft just barely beat out Cessna for bragging rights about having the first pressurized light twin with the Duke, Cessna’s 340 would quickly outsell the Duke and become the world’s most popular aircraft in this category.

The 340 is a six-seat aircraft, with four passenger seats, an aisle and an airstair door. The tail and landing gear were based on the Cessna 310's units, while its wings were from the Cessna 414. The 340's primary selling feature was its spacious, pressurized cabin, the first in a light twin.

Work on the 340 began in 1969, and the first aircraft was delivered in 1972, behind schedule because one of the prototypes crashed during flight testing in 1970.

The early models have two turbocharged Continental TSIO-520-K engines with 285 hp each. Starting in 1976, the engines were upgraded to the more powerful Continental TSIO-520-NB engines of 310 hp. This variant is known as the 340A and it also features smaller 75.5-inch diameter propellers to reduce noise and meet ICAO Annex 16 noise requirements.

The 340 became so popular that Cessna decided to offer an unpressurized version for those who wanted the other features of the 340 but at a lower cost. This aircraft, the Cessna 335, began production in 1979 and had some slightly smaller engines. But as it turned out the main reason people liked the 340 was for its pressurization, and the 335 wasn’t selling. Cessna ceased production after only one year and 64 aircraft.

Cessna kept up with the high demand for the 340 through 1984. When the last aircraft came off the line, Cessna had built 1,287 aircraft.