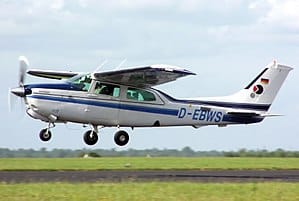 View All Cessna 210 Aircraft For Sale

The Cessna 210 Centurion is a six seat, single-engine, piston aircraft configured as a cantilever high-wing aircraft with a conventional tail. It features retractable gear and a constant-speed propeller. It seats up to 5 passengers and a pilot.

In 1961 the fuselage and wing were completely redesigned – the fuselage was made wider and deeper, and a third side window was added. The wing planform remained the same (constant 64″ chord from centerline to 100 inches out, then straight taper to 44″ chord at 208 inches from centerline), but the semi-Fowler flaps (slotted, rear-moving) were extended outboard, from Wing Station 100 to Wing Station 122, which allowed a lower landing speed (FAA certification regulations state that a single-engined aircraft must have a flaps-down, power-off stall speed no greater than 70 miles per hour. To compensate for the reduced aileron span, the aileron profile was changed and its chord enlarged.

The 1964 model 210D introduced a 285 hp  engine and two small child seats, set into the cavity which contained the mainwheels aft of the passengers.

In 1967 the model 210G introduced a cantilever wing replacing the strut-braced wing. Its planform changed to a constant taper from root chord to tip chord. In 1970 the 210K became the first full six-seat model. This was achieved by replacing the flat leaf-springs used for the retractable main landing gear struts (undercarriage) with tapered tubular steel struts of greater length. This allowed the tires to be nested farther to the rear of the fuselage, making room for the full-size rear seats. In 1979 the 210N model eliminated the folding doors which previously covered the two retracted main wheels. The tubular spring struts retract into shallow channels along the bottom of the fuselage and the wheels fit snugly in closed depressions on the underside of the fuselage. Some models featured de-icing boots as an option.

On 21 May 2012 the airworthiness authority responsible for the design, the US Federal Aviation Administration, issued an emergency Airworthiness Directive requiring 3,665 of the cantilever wing Cessna 210s to be inspected for cracks in the spar cap, wing spar and wing. Aircraft with more than 10,000 hours of airframe time were grounded immediately pending a visual inspection.

On 16 May 2019, a Cessna Model T210M airplane suffered an in-flight separation of the right wing. Preliminary investigations found cracking of the wing-spar carry-thru where fatigue began from a small corrosion pit on the lower surface of the carry-thru. Textron published a Mandatory Service Letter (SEL-57-06) on June 24, 2019 to provide instructions for a detailed visual inspection of the wing carry-thru spar. The FAA issued an Airworthiness Directive on 21 February 2020 mandating eddy current inspections of the carry-thru spar lower cap, corrective action if necessary, application of a protective coating and corrosion inhibiting compound, and reporting the inspection results to the FAA. Since it shared a common carry-thru design, the Cessna 177 Cardinal also received a similar Mandatory Service Letter (SELF-57-07) and an airworthiness concern from the FAA.

The early strut-winged Cessna 210B was developed into a fixed-gear aircraft known as the Cessna 205. This spawned an entirely new family of Cessna aircraft including the 206 and the eight-seat 207.

A 210F with a strutless cantilever wing and modified rear window, increased takeoff weight to 3,400 lb, introduced in 1967, 228 built.

A 210K with nose-mounted landing lights, the electrical system changed to 24 volt, the engine-driven hydraulic pump replaced with an electrical pump and a three-bladed prop fitted. Improved aerodynamics led to an increase in approximately 8 kts in cruise speed. Produced 1972-76, 2070 built.

A 210M with open wheel wells for main landing gear and minor changes. Although this change appeared only on the C210N, most early models have had gear doors removed due to extensive maintenance and handling problems, leaving them similar to the “N”. Produced 1981-84, 1943 built.

Search for Cessna 210 for sale now!