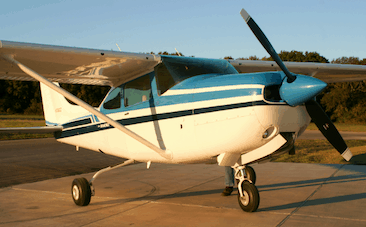 View All Cessna 182RG For Sale

The Cessna 182RG is a single engine piston aircraft with retractable gear built from 1978 through 1986. Serial Numbers 1 through 2041. The Cessna R182RG Skylane seats up to 3 passengers and 1 pilot.

The Cessna 182RG and Turbo 182RG offer 10-15% improvement in climb and cruise speeds over their fixed gear counterparts or, alternatively, 10-15% better fuel economy at the same speeds at the expense of increased maintenance costs and decreased gear robustness. The 1978 R182 has a sea level climb rate of 1140 fpm and cruising speed (75% BHP) at 7,500 feet (2,300 m) of 156 KTAS at standard temperature.

The landing gear retraction system in the Skylane RG uses hydraulic actuators powered by an electrically driven pump. The system includes a gear position warning that emits an intermittent tone through the cabin speaker when the gear is in the retracted position and either the throttle is reduced below approximately 12″ MAP (manifold pressure) or the flaps are extended beyond 20 degrees. In the event of a hydraulic pump failure, the landing gear may be lowered using a hand pump to pressurize the hydraulic system. The system does not, however, allow the landing gear to be manually retracted.

The Skylane RG was introduced in 1978 to almost unanimous rave reviews from both the aviation press and, more importantly, the flying/buying public. A turbocharged version premiered a year later with essentially the identical engine supplemented by a blower. Turbocharging further expanded the airplane’s utility value and made it a viable model in the high country of the west.

Unfortunately, the timing was all wrong. Skylanes had always been popular airplanes in any configuration, but the market was turning downhill in the early 1980s, and Cessna, Piper, and Beech all scaled back production to meet diminishing demand. I was delivering airplanes to Europe and Africa at the time, and I still remember how much I liked the retractable gear. Retractable gear was the final improvement that made the 182 RG a standout design in those heady days. The 182RG was stable, didn’t object to being flown 25 percent of gross (with a ferry permit, of course), and handled nearly as well as a 182 at normal weights.

Over 200 Skylane RGs and Turbo Skylane RGs were produced before Cessna shut down all piston production in 1986. This gave the retractable Skylanes the dubious distinction of being two of the shortest-lived Cessna models, through no fault of their own. In 1986, the last year of Skylane RG production, a normally aspirated RG sold for $136,680 and a turbo model had an average list of $150,755.

So, here we are in 2015, and the Skylane RG has been laid to rest for some 30 years. As if we needed an excuse, it seemed a logical idea to look back at the old Skylane RG and consider what preceded it and what followed it. The airplane we found at Channel Islands Aviation in Camarillo, CA, was, in many respects, typical of the type. A 1979 turbo model with only 2700 hours total time and 970 hours on the engine, the airplane was fitted with a standard stack of Cessna radios plus a King DME. The paint was new, but the rest of the airplane was original: a 36-year old, middle-of-the-road family station wagon without a mean bone in its aluminum body.

Perhaps for that very reason, many pilots regard the folding-foot Skylanes as among the best used-plane buys on the market. In addition to simple systems, docile handling, and good load-lifting capability, Skylanes of all types have long enjoyed outstanding resale value.

Inevitably, some readers are bound to ask up front about the relative advantages of the Skylane, Skylane RG, and Turbo Skylane RG, so we fell back on our trusty library of Jane’s All-The-World’s Aircraft for a look at 1979 comparative specs and consulted Aircraft Bluebook Price Digest to examine prices. It’s apparent that the big jump in price comes for retractable gear and that turbocharging was relatively minor delta, both in 1979 and today. It’s also interesting that the normally-aspirated Skylane RG is the strongest climber, despite its heavier weight. Both of the retractables offer better payloads than the higher gross weight. All three airplanes are essentially four-seat, full-fuel machines, always one of the Skylanes’ strongest recommendations.

Aside from the obvious addition of retractable gear, another major change on the Skylane RG was a switch from the carbureted Continental O-470 to a Lycoming O-540 engine, primarily to accommodate the retractable-nosewheel housing. In other applications, the big 540-cubic-inch Lycoming churns out as much as 350 hp (Navajo Chieftain, Mirage), and Cessna considered upgrading horsepower on the RG. In the inevitable domino effect of any design change, more power would have precipitated a higher fuel burn. In turn, that might have necessitated a larger fuel capacity to preserve range, demanding a higher gross weight which could have increased stall speed, possibly requiring aerodynamic changes. The result would have been substantial design and certification expense. As a result, the finished airplane was rated for only 235 hp, a mere 5 hp more than the original Skylane.

Max rpm for both climb and cruise was set a neighborly 2400 rpm, relegating use of the prop control to the ramp. Such severe derating meant the big Lyc was hardly working, and the result was a 2000-hour TBO on both the normally-aspirated and turbocharged RGs.

While the minuscule horsepower increase by itself made no difference in climb or cruise, one might logically have expected the shift from fixed to retractable gear to yield more than 12 knots of speedup. One explanation may be that a standard Skylane would be working hard to generate 144 knots, whereas virtually all the Skylane RGs could score 156 knots. In other words, the real gap between the two models may have been slightly greater than book numbers suggest.