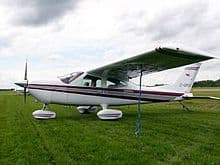 View All Cessna 177 For Sale

Single engine piston aircraft with fixed gear built from 1968 through 1978. Serial Numbers 1 through 27526. The Cessna 177RG Cardinal seats up to 3 passengers and 1 pilot.

The Cessna 177 Cardinal is a light single-engine, high-wing general aviation aircraft that was intended to replace Cessna's 172 Skyhawk. First announced in 1967, it was produced from 1968 to 1978.

Although Cessna’s 177 Cardinal was intended to be a Skyhawk killer, the venerable 172 outlasted it and continues to be a mainstay in Cessna’s current piston aircraft line. Still, the Cardinal enjoys enthusiastic support among owners for many of the reasons that Cessna thought it would become a hit. And despite its warts and shortfalls, many of which have been rectified, the Cessna Cardinal is an excellent choice for owners who want a bit more performance than the Skyhawk offers without stepping up to the 182 Skylane.

The Cessna 177 was designed in the mid-1960s when the engineers at Cessna were asked to create a “futuristic 1970s successor to the Cessna 172”. The resulting aircraft featured newer technology such as a cantilever wing lacking the lift struts of previous models, and a new laminar flow airfoil. The 177 is the only production high-wing single-engined Cessna since the Cessna 190 & 195 series to have both fixed landing gear and a cantilever wing without strut bracing.

In 1971, Cessna experimented with a “Quiet Cardinal” similar to the Beechcraft QU-22 Pave Eagle. A test model was flown with a Wankel engine with a large three bladed 100 inch diameter propeller with a belt driven gear reduction unit and a fuselage-length exhaust canted upward.

The 1968 model 177 was introduced in late 1967 with a 150 hp (112 kW) engine. One of the design goals of this 172 replacement was to allow the pilot an unobstructed view when making a turn. In the 172 the pilot sits under the wing and when the wing is lowered to begin a turn that wing blocks the pilot's view of where the turn will lead to. The engineers resolved this problem by placing the pilot forward of the wing's leading edge, but that led to a too-far-forward center of gravity.

This problem was partially counteracted by the decision to use the significantly lighter Lycoming O-320 four-cylinder engine in place of the six-cylinder O-300 Continental used on the 172. The forward CG situation still existed even with the lighter engine, so a stabilator was chosen, to provide sufficient elevator control authority at low airspeeds.

The 177 design was intended to be a replacement for the 172, which was to be discontinued after introduction of the new aircraft. The new design was originally to be called the 172J (to follow the 1968 model 172I). However, as the time came to make the transition, there was considerable resistance to the replacement of the 172 from the company's Marketing Division. The 1969 172 jumped to the designator 172K—there is no 172J.

The 177 offers much better upward visibility than a 172 because of its steeply raked windshield and more aft-mounted wing. The absence of an obstructing wing support strut also makes the aircraft an excellent platform for aerial photography.

Soon after delivery of the first Cardinals to customers there were reported incidents of pilot-induced oscillation (PIO) that alarmed Cessna enough that the factory initiated a priority program to eliminate the problem. Reviewer Joe Christy explains:

We liked that airplane, and found almost nothing to pick at. However, owners soon discovered to their horror that it didn't fly or land exactly like a strutless Skyhawk, and some heavy-handed Super-Car drivers managed to smash the Cardinal tail into the pavement on landing, knock-off a few nose-wheels, etc. (apparently, this was possible if one closed his eyes, used full back-pressure on the wheel at the flare and then sat rigidly waiting for the crashing noises to subside). Cessna accepted the blame gracefully. That was proper because, after all, they had lulled a generation of Cessna pilots into near-effortless flying with the extremely forgiving 172 series, and it probably wasn't ethical to suddenly offer, to many of those same customers, a Cessna that didn't handle exactly like a Cessna. The company therefore picked up the tab for a list of modifications that gentled the Cardinal and returned the smiles to the faces of dealers and customers.

The solution, which was provided to all aircraft already delivered at no cost, was known as Operation “Cardinal Rule” and included a series of 23 inspection, installation, and modification instructions. This Service Letter, SE68-14, consisted of modifying the stabilator to install slots just behind the leading edge (to delay the onset of stabilator stall) and installing full counterbalance (11 pounds versus the original 7 pounds) on the stabilator to eliminate the PIO problem.

In addition, there was a 150-pound increase in gross weight to compensate for both the engine’s increased mass and some shortcomings in the original airplane’s useful load. The stabilator-to-wheel control linkage ratio was changed to slow the response in pitch slightly. The nosegear/firewall area was also beefed up to prevent bent metal from bounced landings. This fix was offered as a retrofit to 1968 models via an early bulletin.

Despite the improvements, 1969 sales nose-dived to about 200 units, while Skyhawk sales rebounded to their former league-leading levels.

In 1975, speed went up again, but this was really mostly the result of some creative number crunching by Cessna. For example, the cruise RPM limit was increased so that 75 percent power could be obtained at 10,000 feet instead of at 8000 feet, as before.

At the time, Cessna’s marketing department called the Cardinal “the fastest 180-HP, fixed-gear airplane in the world.” Not true—the Grumman Tiger was at least 8 or 9 knots faster—at about the same price.

Finally, 1976 brought a new instrument panel. The older panels had a 1960s Buick-style split panel arrangement that did little but rob panel space. The 1976 panel is a more conventional, full-width design.

Throughout this period, the airplane continued to be a slow seller, despite Cessna’s successful efforts to fix the original Cardinal’s quirks. It was the only Cessna single that didn’t lead its category in sales. Piper’s Cherokee 180/Archer beat it handily, as did the upstart Grumman Tiger.

In 1977, Cessna finally gave up on further changes to the 177 Cardinal. The Hawk XP was introduced—same performance, less attractive, worse handling, noisier, more cramped, much higher fuel consumption and engine maintenance, lower engine reliability and TBO. Such is the way of GA marketing, however.

Meanwhile, Cessna added ARC radios to the standard equipment list and boosted the Cardinal’s price by about 50 percent. Customers preferred the Hawk XP by a four-to-one margin. Price and competition from Grumman and Piper undoubtedly had a lot to do with the poor sales, but the Cardinal’s first year reputation clung to the model like a cheap suit.

In 1978, Cessna built a deluxe version of the 177B, the Cardinal Classic, with leather upholstery, a table for the rear passengers, and a 28-Volt electrical system.

Cessna 177RG
The final aircraft in the 177 line was the retractable-gear 177RG Cardinal RG, which Cessna began producing in 1971 as a direct competitor to the Piper PA-28-200R Cherokee Arrow and Beechcraft Sierra. The nose gear folds rearward; when opened the gear door formed a small air brake behind the propeller.

To offset the 145 lb (66 kg) increase in empty weight, much of which was from the electrically powered hydraulic gear mechanism, the 177RG had a 200 hp (149 kW) Lycoming IO-360 engine. This also allowed increase of the maximum weight by 300 lbs.

Search for Cessna 177 for sale now!