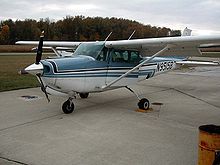 View All Cessna 172RG For Sale

Cessna 172RG is a single engine, piston aircraft with retractable gear.  The 172RG is a high-wing airplane produced by Cessna between the years 1980 and 1985, Serial Numbers 1 through 1191. It seats up to 3 passengers and 1 pilot.

Cessna introduced a retractable landing gear version of the 172 in 1980 and named it the Cutlass 172RG.

The 172RG did not find wide acceptance in the personal aircraft market because of higher initial and operating costs accompanied by mediocre cruising speed, but was adopted by many flight schools since it met the specific requirements for “complex aircraft” experience necessary to obtain a Commercial Pilot certificate (the role for which it was intended), at relatively low cost. Between 1980 and 1984 1,177 RGs were built, with a small number following before production ceased in 1985.

While numbered and marketed as a 172, the 172RG was actually certified on the Cessna 175 type certificate.

The timing of the Cutlass introduction was unfortunate; it hit the market in 1980, generally seen as the year when the GA slump began. Essentially, the Cutlass was a retractable 172 fitted with a carbureted Lycoming O-360 and constant-speed prop (the same basic power package found on the fixed-gear Cardinal, though with a different variant of the engine).

Though it fell into the same basic class as airplanes like the Arrow, the Cutlass suffered from a power deficit (compared to contemporary competitors) that kept it from vying successfully for that market niche. Cessna's real goal, we believe, was to create a trainer that would step pilots up to complex aircraft. In this role, the Cutlass did well, with sales to the big flight schools.

In terms of configuration, the Cutlass is straight 172, with the exception of the electro-hydraulic landing gear. Wisely, Cessna left off the main gear doors that had proven so troublesome in other retractable singles.

By the time the 1980s rolled around, light aircraft manufacturers had essentially stopped trying to freshen their models every year. The first Cutlass is pretty much the same as the last.

Cutlass prices have, for the most part, seriously lagged behind the rest of the used-aircraft market. A 1980 172RG regained its original value only a few years ago, and still hasnt exceeded it by much: this has not kept up with inflation.

All the same, considering the aircrafts competition, its done reasonably well. Arrayed against it are two Cessna models (the ill-starred Cardinal RG and the beloved 182RG Skylane), as well as Pipers Arrow in its various incarnations.

While its possible to get a cheaper 180-HP single-engine retractable, you also stand to get higher maintenance costs. By the same token, the nearest competitor for the Cutlass-Cessnas own 177RG Cardinal-offers more performance, but costs more to own.

For example, a 1971 Piper Arrow (the last year that a 180-HP model was offered) can go one knot faster, carry almost 100 pounds more payload and costs about $15,000 less to buy than the cheapest Cutlass. However, its engine costs an extra $2,500 to overhaul. And, with only 50 gallons of fuel on board, it cant fly as far. Plus theres the fact that its nine years older than the oldest Cutlass.

At the other end of the spectrum, the Cessna 177RG Cardinal will cruise eight knots faster (and carry 12 pounds more). But it uses a 200-HP engine to do it. It also has reduced range, carrying only 61 gallons of gas. The last Cardinal RGs cost about the same as the earliest Cutlasses.

In a sense, though, the sluggishness in price increases makes the Cutlass one of the best values to be had in the four-place retractable market, assuming age of the airplane is a factor. There are a number of reasons for this statement beyond pure acquisition cost.

While there are some Lycoming engine models that can drive an owner to tears, Cessna fortuitously chose the remarkable Lycoming 0-360-F1A6 for the Cutlass. This engine has earned a reputation for reliability far above that of most engines.

Indeed, our check of FAA service difficulty reports for a representative six-year period disclosed only one troubling trend for this engine-sticking valves. Even this, though, appears to be not too great a threat. Only 10 reports surfaced in our printout, with nine of them stuck exhaust valves. Its worth noting that, in the greater context of Lycomings historic valve-sticking problems in -300-series engines, this many reports constitutes minor trouble.

Beyond this, there was nothing else of note in the records. This bodes well for an owners peace of mind, not to mention his pocketbook.

Not to let enthusiasm carry too far, there are other items on the Cutlass that will cost an owner money. We found several matters that are almost guaranteed to become a problem for a Cutlass owner.

One is the aircrafts landing gear system. Its worth noting that Cessna never termed any of its retractable landing gear systems Land-O-Matic as it commonly did with fixed-gear models. Indeed, theres nothing O-Matic about this system at all, leading one wag to term it Fail-O-Matic.

Like many of its Cessna single-engine retractable brethren, the Cutlass landing gear system is enough to give an owner fits. If its not one thing (like a dead, burned-out or jammed hydraulic pump-of which we counted 13 reports), its another (like gear leg bumper pads which prevent the gear from locking down-some 21 reports filed).

The gear leg bumper pads (also known as down-stop pads) are critical items. Most reports spoke of a pad coming loose, then jamming between the gear leg and wheel well. This prevented the leg from reaching the locked position, and it collapsed on touchdown. Fortunately, the pads are easily visible on preflight, so a pilot can check them before going.

Cracking and breaking of various gear components was another trouble spot. A prime example used to be the plastic T fitting used to help lock the nose gear down. This item was common to most of the Cessna single-engine retractables, and many a pilot and mechanic watched with bemusement and distress as the nose gear on the parked airplane simply folded up, dumping the bird on its nose.

Cessna eventually came out with a metal replacement part, and reports of this problem have since died away. However, we found three reports in our scan, so its worth checking before buying.

Another trouble spot was highlighted by a Cessna service bulletin. Cracking and breaking main-gear pivots accumulated 10 reports in our survey. Wise buyers will make sure the service bulletin has been complied with before putting any money down.

Yet another problem area was main gear actuator bolts. Some 21 reports indicated loose, backed-out or broken bolts. Again, careful inspection of the landing gear is a must for any prospective buyer.

And of course, like the rest of the Cessna single-engine retractables, the Cutlass is prey to a non-recoverable landing-gear system failure. While a hand pump is provided to manually extend the gear in the event of hydraulic pump failure, neither the mechanical nor the manual system will work if theres no fluid to pump. A ruptured hydraulic line or other system leak means a gear-up landing.

Compounding the problem is the hydraulic pump, which will periodically cycle on and off during flight to maintain system pressure. If there is a leak, the pump will probably be done pumping all the fluid overboard by the time the pilot realizes its been running too long and pulls the breaker.

The Cutlass can certainly earn its keep. With a typical 1,000-pound useful load, decent cruise speeds and good range, it will get you, your passengers and some baggage to most places you want to go.

Most owners report 130- to 135-knot cruise speeds. This puts the Cutlass about even with both the Arrow and the Skylane. However, its worth noting that the lowly Grumman Tiger can produce 140 knots using the same size engine with a fixed-pitch prop and its landing gear hanging in the breeze. And the Skylane, of course, has a much better payload.

Interestingly, cruise speed can vary with CG Like the Skylane RG, the Cutlass gains speed as the CG moves aft (and as weight goes down). This may be due to the position of the open wheel wells (there are no gear door enclosures) on the backside of the tapered fuselage. At gross weights, goes the theory, the aircraft flies at a higher angle of attack, which causes the airflow to be disrupted as it passes over the open wells. At lighter weights and/or more aft CG, angle of attack decreases just enough so that the wells are out of the direct slipstream. Then, the air flows smoothly by them, providing a bonus of up to 10 knots, according to one owner.

The Cutlass other big virtue is range. With 62 gallons of usable fuel, youll probably run out of bladder before you run out of gas. The 180-HP Lycoming sips a miserly 10 GPH at max cruise, giving the Cutlass six hours of endurance. Throttled back to a more moderate power setting, fuel consumption drops to eight GPH, giving the airplane a whopping eight hours or more endurance. Indeed, book figures show a range of 720 NM at 75 percent power and 9,000 feet (including reserves). Throttle back to 55 percent power, and range jumps to 830 NM.

The Cutlass is no slouch when it comes to load hauling, either. Max gross is 2,650 pounds. Cessna actually published a ramp weight for the Cutlass which allowed an extra eight pounds to taxi around with-based on the idea that about 1.3 gallons of gas would be burned before takeoff.

A typical Cutlass with an IFR panel might tip the scales at about 1,650 pounds. This leaves a half ton of useful load-quite good for a mere 180-HP aircraft. Indeed, thats enough to allow two 170-pound men and their 140-pound wives to fly away with full tanks. And theres almost always the option of trading some fuel for passenger and/or baggage weight.

Unlike its stablemates, the Cutlass is rather sensitive to balance-if by sensitive one means its possible to load it out of limits. While the Skylane and Skyhawk are nearly impossible to get too far aft, the Cutlass can be loaded that way.

For example, load your Cutlass with 44 gallons of fuel, four 150-pound passengers and 140 pounds of baggage and the CG will be right on the aft limit. But, toss 200 pounds into the rear baggage area (its weight limit) and another 50 pounds on the rear hat shelf and the back seats must remain empty. Its worth noting that air conditioning was not offered as an option on the Cutlass (as it was on the Skyhawk), and CG problems may have been the reason.

In keeping with its roots, the Cutlass handles much like the 172. Indeed, few pilots would notice much difference. There are differences, though. The controls are a little bit lighter, and pitch trim authority is increased.

As with later Skyhawk and 152 models, the flaps on the Cutlass are limited to only 30 degrees deflection. Although some might argue that the decreased flap deflection robs the Cutlass of some short-field performance, the airplane can still hold its own when operating out of hot, high strips that frighten away many other retractable-gear airplanes. Then, too, many owners have opted for STOL mods which more than compensate for the missing 10 degrees of flaps.

Ground handling, while pretty straightforward, does require some attention. Sharp turns require very slow speeds and some differential braking. Touchdown on landing should be at or very close to the stall, since wheelbarrowing can be a problem. And crosswind correction is a must at all times. Like most high-wing airplanes, the Cutlass can be blown over if not handled properly in strong winds.