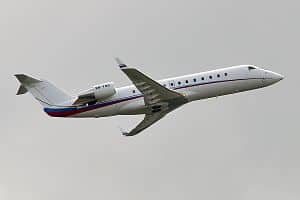 View All Challenger 850 For Sale

Bombardier began the Canadair Regional Jet program in 1989 and delivered the first CRJ in 1992. They stretched the Challenger 600 fuselage by more than 19 feet and built a larger wing and required more powerful engines. Deliveries of the 44-50 seat CRJ models 100/200/440 totaled 1021. The models are no longer in production.

The company later delivered 733 of the 700/900/1000 stretch series aircraft which seat 70-90 in airline configuration. Later versions of these models were called the Challenger 870 which seats 42-44and Challenger 890 which seats 52.

Before 2006, Bombardier built the CRJ100/200 in executive configurations and named the model the Challenger 800. They manufactured more than 30 of these.

In 2006 Bombardier updated the Challenger 800 and named it the Bombardier Challenger 850. It  was produced from 2006 to 2012 and delivered until 2017. This aircraft is no longer for sale. It is capable of accommodating 12–16 passengers. The Challenger 850 jet has a transcontinental range and a high-speed cruise of Mach 0.80.

The cabin is almost equal to the cabin in the more pricey Global 6000. The Challenger 850 cabin includes a 3 tier cabin with forward and aft lavs, a large forward galley, a pass-through baggage compartment, and spacious center lounge and entertainment center or aft stateroom.

The Challenger has a 2985 nm range with 4 passengers and crew with a service ceiling of 41,000 ft, however, altitudes above 38,000 are rarely used due to poor engine performance.

The engines are General Electric CF34-3B1 turbofans with 8729 lbs of thrust each. They are economical to maintain and built to sustain 12 takeoff and landing cycles a day.

Search for Challenger 850 for sale now!