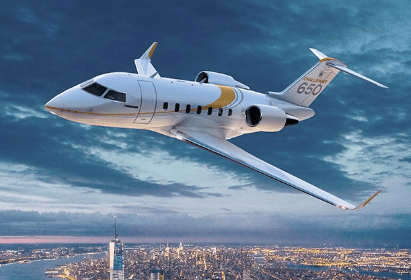 View All Challenger 650 For Sale

The Bombardier Challenger 650 is a twin-engine, fanjet aircraft with a retractable gear. It was produced by Bombardier beginning in 2015 and is still made today, Serial Numbers 6050 through 6140+. Seating capacity up to 10 passengers and 2 pilots. Business seating configurations seat up to 9 passengers comfortably.

It was announced during NBAA 2014, with NetJets being the launch customer – ordering an impressive 75 650s. Production began in 2015.

The Challenger 650 features 2 additional executive seats to accommodate up to 12 passengers, and upgraded engines offering a 5% increase in takeoff thrust rate to reduce takeoff field length.

The Bombardier Vision flight deck offers the industry’s most extensive baseline feature set including synthetic vision and MultiScan weather radar. Sharing much of the same functionality as the Proline Fusion found on our Global aircraft, the Challenger 650 aircraft is available with all the technology you need today and tomorrow.

The wing design delivers an ultra-smooth ride and delivers class-leading reliability with more system redundancies than any of its competitors. It has a 4,000 nm range, and with its steep approach certification, the Challenger 650 aircraft can operate in and out of challenging airports like Aspen and Lugano.

The Challenger 650 aircraft has the lowest direct operating cost in its class through affordable maintenance programs and longer maintenance intervals than the competition.

Search for Challenger 650 for sale now!