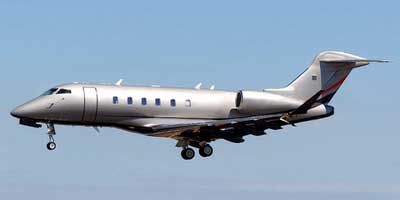 View All Bombardier Challenger 350 For Sale

The baseline Challenger 300 was launched at the 1999 Paris Air Show as the Bombardier Continental. An all-new design, it received Transport Canada type approval on 31 May 2003, followed on 4 June by US FAR 25 certification and on 31 July by European JAR 25 approval. Assembled in Wichita, Kansas, it entered commercial service on 8 January 2004 with Flexjet. The new design is not developed from the Challenger 600 or its variants.

The fuselage and the wing are semi-monocoque aluminum structures, the winglets are composite. Outboard ailerons are manually actuated, elevators and rudder are hydraulic with a mechanical backup, fly-by-wire spoilers augment roll control, act as speedbrakes and dump lift on the ground, hydraulic single-slotted fowler flap have four positions : 0/10/20/30°. The Rockwell Collins Pro Line 21 avionics include four LCD displays, an EICAS and Maintenance Diagnostics Computer, an EGPWS, a TCAS II and an ELT.

The improved variant first flew on March 2, 2013, was unveiled at the next May EBACE and was due to enter service in May 2014. Combined with a more luxurious interior and 20% taller cabin windows, it costs $1 million more at $25.9 million. Its launch customer, NetJets, ordered 75 firm and 125 options. It received its type certification from Transport Canada on June 11, 2014, from the FAA on June 25 and from the EASA on September 2. In 2018, 60 Challenger 350s were delivered as Bombardier claims a 58% market share of the super mid-size segment, and the 300th delivery was reached in July 2019, after five years of service.

Hot-section modifications and a FADEC push gave the Honeywell HTF7350 7.3% more takeoff thrust at 7,323 lbf with the same flat rating, durability and reliability. A strengthened wing with canted winglets and more span allows for 900 lb more full fuel payload. Canted winglets have a less acute angle that reduces transonic drag and enlarge the span by 5.2 ft , increasing wing area and aspect ratio. At a weight of 30,200 lb it cruises at Mach 0.80 / 455 kn TAS and is advertised as burning 1,535 lb per hour.

Bombardier maintenance program runs $277 per hour and inspection intervals are at 600 hr. The avionics include four Adaptive LCD Displays, Dual FMS with LPV and RNP approaches capability, SVS, a MultiScan, Weather Radar, Dual IRS, dual SBAS GPS, integrated EFIS and dual VHF and HF radios. It is able to carry eight passengers over a 3,200 nmi range at a Mach 0.80 long-range cruise. It is manufactured in Canada.

In November 2014, for nearly one million hours of operations, the 448 Challenger 300 in service had a 99.79% dispatch reliability rate ; five-year-old aircraft retain 64% of their original value. At the end of 2015, 550 Challenger 300/350 were in service : 402 in North America, 75 in Western Europe, 37 in Latin America, 12 in Eastern Europe, seven in India, six in Africa and China, four in Asia Pacific and one the in Middle East ; the largest operator was Flexjet with 30 Challenger 300s and seven 350s, then Netjets with 26 delivered, including four to Netjets Europe.