View All Bellanca For Sale

The Bellanca Cruisair is a single-engine, piston aircraft in a low-wing cantilever configuration produced by Bellanca Aircraft between the years 1946 and 1961. The Cruisair was one of the first retractable gear aircraft mass produced with the main gear retracting into wheel wells in the wing. Distinguishing features are a fixed tailwheel, all fabric construction over a wood wing with a 2 blade prop. The Cruisair seats up to 3 passengers and 1 pilot.

VIEW SPECIFICATIONS ON OTHER MODEL BELLANCAS

The Bellanca company had a long pre-WWII history of building efficient light aircraft. Giuseppe Mario Bellanca emigrated to the United States from Italy and was an early builder of aircraft in the 20's. He established a reputation for designing highly efficient and fast aircraft starting with the Bellanca CF series. Eventually G. M. Bellanca came to work for the Wright company, where he was commissioned to design an airplane to showcase the Wright company's new J-5 Whirlwind radial engine, the first truly reliable aircraft engine.

The resulting airplane was the Wright-Bellanca, which Charles Lindbergh tried to purchase for his transatlantic trip. Unfortunately for Bellanca, the owners of the airplane played games. They informed Lindbergh that they'd be happy to sell the airplane but that they would name their own pilot. Lindbergh understandably walked away and took his business to Ryan, and subsequently made history with the Spirit of St. Louis (also powered by a Wright Whirlwind).

It was a close thing, though, because the Wright-Bellanca was ready to fly through the spring of 1927 leading up to Lindbergh's flight and both planes were located at Roosevelt Field near New York City. What kept the Wright-Bellanca on the ground was not mechanical problems but the courts, since the owners were suing each other over who would be the pilot. Ultimately, the Wright-Bellanca, named Miss Columbia, did make a transatlantic flight from New York to Berlin two weeks after Lindbergh's milestone.

In many ways the Miss Columbia flight was more interesting technically, since the Wright-Bellanca was a general purpose airplane seating more than one passenger. The only modifications for its transatlantic flight consisted of removing the rear seats and replacing them with extra fuel tanks. By contrast, The Spirit of St. Louis was purpose-built for the transatlantic flight and only carried one passenger in an awkward blind cockpit. Lindbergh did, however, have the vision, innovative ideas about navigation, and ultimately had the will to make the flight and make it first, and he deserves his place in history along with his airplane.

G. M. Bellanca found new, more upstanding, financial backers and continued to build airplanes. Descendents of the Miss Columbia evolved into the CH series, which were used in numerous famous and record-setting flights. One of the most notable was the Miss Veedol, flown by Clyde Pangborn on the first nonstop flight across the Pacific in 1931 from Japan to Wenatchee, Washington. To save weight the wheels were jettisoned after takeoff, and the aircraft belly landed (e.g. crashed) upon arrival. A replica known as the Spirit of Wenatchee is currently being constructed to commemorate this flight. 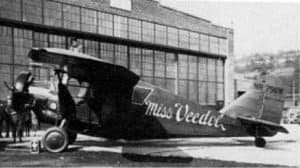 G.M. Bellanca's designs turned out to be excellent bushplanes, and his Pacemaker and Skyrocket designs saw extensive use in Canada, Alaska, and bush locations around the world. One of the most interesting looking is this Aircruiser, which is located at the Tillamook Air Museum in Oregon. This aircraft is huge and has the distinctive Bellanca airfoil-struts.

Construction of the series is fairly conventional with wings constructed of spruce with plywood skin and fuselages built up from a welded steel-tube framework with a fabric covering. A constant process of refinement led to many variants, sometimes given new names but retaining the same structure differing only in powerplant, minor details and furnishings. The only major variations were the introduction of a single swept fin and tri-cycle retractable undercarriage. Production was carried out at a variety of companies, including Bellanca, Downer, Aviabellanca, Northern Aircraft and Inter-Air, with little variation other than powerplant and furnishings.

The highly responsive flying characteristics of the aircraft are evident to anyone who has flown one. Bill Cox, the well known aviation journalist at Plane and Pilot Magazine commented regarding the flying qualities of Vikings that they “have long been famous for control response and harmony that seems almost psychic in nature”, and asserted, “Owners almost unanimously pronounce the Viking the best handling airplane they've ever flown.”

Pre-war development culminated in the 1941 14-12, at which point production ceased to allow Bellanca to work as a military subcontractor for the duration of the war when an attempt to market a militarized version as a trainer was unsuccessful. After the war, Bellanca returned to the design to create the Bellanca 14-13 and its successors.

In the late thirties Bellanca realized that cheaper, smaller airplanes were the future of general aviation. The Cruisair Junior was initially designed in 1939 as a light, three to four place cruiser powered by a 70hp or 90hp LeBlond radial. This very rare Cruisair Junior is kept at the Carolinas Air Museum in Charlotte, North Carolina.

Bellanca established itself in the market for 6-8 seat aircraft, but believed that it could also successfully sell smaller 3-4 seat aircraft. To fill this niche Bellanca designed The '14-7 Cruisair' as a modern, low-wing cantilever monoplane with a fuselage intended to contribute lift to the design. Although the prototype flew with fixed tailwheel undercarriage, the 14-9 production version was the first US light aircraft to be mass-produced with retractable undercarriage, the main wheels rotating aft into wheel-wells in the wings, with approximately 50 produced before production was interrupted by World War II.

After WWII Bellanca resumed production with the up-dated Bellanca 14-13 Cruisair Senior, retaining the Bellanca 14-7's basic design. It was built in relatively large numbers with a horizontally opposed Franklin 6A4-335-B3 150 hp engine in place of the earlier models' Le Blond radial and a Aeromatic propeller. The main landing gear retracted into the wing using a manually cranked bicycle chain system. It featured an enlarged cabin, and an oval vertical endplate on each horizontal stabilizer. This latter feature gained the type the affectionate nickname “Cardboard Constellation”, because the arrangement is similar to the contemporary Lockheed Constellation airliner.

Taking its name from the Bellanca tradition of identifying the series from the wing area in square feet, dropping the final digit, while the second number was the aircraft's horsepower, again dropping the final digit, the 14-13 did not quite fit the naming convention. The Bellanca 14-13 wing was constructed of wood, while the fuselage was welded steel-tube framework with a fabric covering.

You can distinguish the earlier 14-13 Cruisair series from Cruisemasters by smaller tail end boards which are shaped vaguely like kidneys as opposed to ovals on the Cruisemasters, and smaller details such as Aeromatic propellers, size of the cowling, and ailerons with external bellcranks and exposed control cables. Some Cruisairs will look like later models because they have been converted to larger Lycoming O-360 or O-435 engines with controllable propellers.

A higher performance design revision was granted FAA approval as the 14-19 Cruisemaster on September 26, 1949. The new model featured structural upgrades, a 190 hp Lycoming O435-A engine, an increased gross weight of 2,600 lbs, hydraulically operated landing gear and flaps, and a deluxe interior. 99 of these airplanes were produced between 1949 and 1951. Externally, a near-look-alike to the earlier models, this version was distinguished by its larger, oval-shaped endplates. All production ceased in 1956 as Bellanca wound up its operations.

The original Bellanca company folded in the mid-50s, however the design continued to live on with the Northern Aircraft Company (aka Downer Aircraft), who produced upgraded Cruisemasters. The first model 14-19 Cruisemaster was a strengthened Cruisair with a 190 hp Lycoming O-435 flat 6 engine, which was succeeded by the 14-19-2 with a 230 hp Continental O-470 flat 6. The different models are often known by their horsepower as “190's” and “230's”. The Cruisemasters were upgraded with a stronger wing and frame, higher weights, hydraulic landing gear and flaps, fully enclosed aileron push-pull rods instead of external cables, and larger tail boards as compared to the Cruisair.

The 14-19 design was revived by Northern Aircraft and granted FAA approval on January 7, 1957 as the 14-19-2 Cruisemaster. The new model featured a 230 hp Continental O-470K engine, an increased gross weight of 2,700 pounds, an updated instrument panel as well as new paint and upholstery schemes. The 14-19-2 was the last taildragger. 104 of these airplanes were produced between 1957 and 1958.

In 1959 the company became Downer Aircraft Company, Inc. and Mr. J. K. Downer was president. More than 100 Cruisemasters were built before production changed to the “Downer 260”, with tricycle gear and the 260 hp Continental. The prototype flew Nov. 6, 1958 and the first production aircraft flew February 20, 1959.

The Bellanca 260 is a development of the Cruisemaster, which it now supersedes. The main change is the installation of the Continental IO-470-F fuel-injection 260 h.p. engine (1500 TBO), a generous power unit for the gross weight of 2,7001b, but one which can offer a useful balance of performance and economy.

The 14-19-3 260 retained the wire-braced triple tail into the 1961 model year. Since manufacturing rights were held by the Downer Aircraft Company. The owner, Jay Downer, wanted to see the plane with a single vertical fin tail and when the order went out for a redesign, an engineering firm in Minneapolis was given the task. They simply added up the surface area of the triple tail’s fins and created a new single fin design with the same area.

In the early 1960's, a newly formed company called Inter-Air (short for International Aircraft Manufacturing, Inc.) leased the plant from the Downer Aircraft Co. and changed the model designation to 14-19-3A, Model 260A. This version built by Inter-Air was equipped with the revised single tail and 260 hp Continental IO-470-F engine.

Although the single tail does not follow accepted aerodynamic principles, the resulting large fin no doubt adds to the very stable flight characteristics of the -3B, Cs and the Viking.

Somewhere along the line the FAA designation for the -3Bs and -3Cs were dropped and all were lumped together as 14-19-3As. Many people consider the Model 260 as the first of the Viking aircraft and although there really is little difference between the 260 and the early Vikings. All of the Cruisemasters and Vikings share the type certificate and wing design, and they have almost identical cabin sizes. The Vikings are heavier and faster but they fly very similarly to the Cruisemasters.

In 1967 Inter-Air merged with Downer Aircraft Co. and changed the name to Bellanca Aircraft Corporation. At this time the Viking 17-30 made its appearance and production of the 260C and the Viking continued at a rate of about 20 per month.

The Viking model was born out of discussions at Downer for a bigger version of the “Model 260” with at least 300 horsepower. The company was based in Minnesota and employed skilled craftsman who manufactured the wing from spruce and the new 300 hp model was named the “Viking” in respect to the many Scandinavians of the area. Later Vikings came with larger engines, turbocharging, and externally a single large swept vertical stabilizer with strut braced horizontal stabilizer.

Search for Bellanca for sale now!