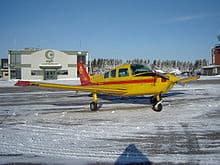 View All Beech Sundowner For Sale

The Beech Sundowner is a single-engine, piston aircraft with fixed landing gear. The Sundowner B23/C23 is a low-wing airplane produced by Beechcraft between the years 1968 and 1983, Serial Numbers M1095 through M2392. It seats up to 3 passengers and 1 pilot.

The Beech Musketeer is a family of single-engined, low-wing, light aircraft that was produced by Beechcraft. The line includes the Model 19 Musketeer Sport, the Model 23 Musketeer, Custom and Sundowner, the Model 23-24 Musketeer Super III the retractable gear Model 24-R Sierra and the military CT-134 Musketeer.

A total of 2,331 Beechcraft 23s of all variants were manufactured by the time production was completed 20 years later in 1983.

A further change in marketing policy in 1971 was to mark the disappearance of the name Musketeer, and simultaneously production of the Musketeer Super was discontinued. The three remaining aircraft became known instead as the Sundowner C23 (formerly Custom), Sport B19 (Sport) and Sierra A24R (Super R). The designations were changed again in 1974 to indicate engine horsepower, the three types becoming respectively Sundowner 180, Sport 150 and Sierra 200. Well over 4,400 Musketeers of all types had been built when production was suspended in 1984.

Beech CT-134 Musketeer
The Canadian Forces purchased twenty-four 1971 model B23 Musketeers, with the first CT-134 arriving at CFB Portage la Prairie on March 23, 1971. The initial batch of CT-134s was replaced in late 1981 with twenty-four 1982 model Beechcraft C23 Sundowners, which were designated by the CF as CT-134A Musketeer II.

The main difference between the Musketeer line and other similar light aircraft is the Musketeer's landing gear. While the competitive Cessna 172s use spring-steel main gear, the Piper PA-28 Cherokees use oleos and the Grumman American AA-5s use fiberglass-sprung main gear, the Musketeer family use a trailing idler link gear system with a compressed rubber puck suspension system. This gives the aircraft quite different landing characteristics compared to the competition; light touchdowns are often accompanied by the idler links skipping and producing a landing that is less-graceful than anticipated. Nevertheless, with practice, smooth landings are easy to accomplish.