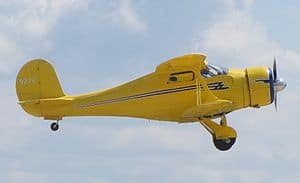 View All Beech Staggerwing For Sale

The Beechcraft Staggerwing Model 17 is an American biplane with an atypical negative wing stagger (the lower wing is farther forward than the upper wing). It first flew in 1932.

The reverse stagger of its wings, its clean fillets (aerodynamic joining of surfaces), and its (later) retractable landing gear made it unique. The Staggerwing would dominate the executive aircraft market until it was replaced, postwar, by the equally classic Beech Bonanza.

The Beech Staggerwing represented a tremendous gamble, for it was launched at the very depth of the Depression by Walter Herschel Beech, a rough-talking, hard-drinking Tennesseean who had carved his way to the top in one of the most competitive aircraft markets in the world — Wichita, Kansas.

Wichita was home to E.M. Laird, Jake Moellendick, Lloyd Stearman, Clyde Cessna, and many other aviation pioneers. Beech had been the principal selling force behind the success of Travel Air aircraft, but that was not enough for him. He wanted to build a cabin biplane that would fly executives over a range of 1000 miles at speeds exceeding 200 miles per hour.

His creation was an instant success, and quickly dominated the marketplace. As the ultimate symbol of prestige, it was expensive — $18,000 at a time when a Cadillac could be purchased for $2,500. It was also demanding to fly, but could transport passengers faster than any competitor, and that's what sells airplanes, then and now.

A total of 748 Beech Staggerwings were built, and not only are many still flying as cherished and immensely valuable classics. (courtesy How Stuff Works)

At the height of the Great Depression, aircraft executive Walter H. Beech and airplane designer Ted A. Wells joined forces to collaborate on a project to produce a large, powerful, and fast cabin biplane built specifically for the business executive. The Beechcraft Model 17, popularly known as the “Staggerwing”, was first flown on November 4, 1932. During its heyday, it was used as an executive aircraft, much as the private jet is now, and its primary competition were the Waco Custom Cabin and Waco Standard Cabin series of biplanes.

The Beech “Staggerwing” Model 17's unusual negative stagger wing configuration (the upper wing staggered behind the lower) and unique shape maximized pilot visibility and was intended to reduce interference drag between the wings (although it was later found to have negligible effect). The fabric-covered fuselage was faired with wood formers and stringers over a welded, steel tube frame. Construction was complex and took many man-hours to complete. The Staggerwing's retractable conventional landing gear, uncommon at that time, combined with careful streamlining, light weight, and a powerful radial engine, helped it perform well.

In the mid-1930s, Beech undertook a major redesign of the aircraft, to create the Beech Staggerwing Model D17. Model D17 featured a lengthened fuselage that improved the aircraft's handling characteristics by increasing control leverage, and the ailerons were relocated to the upper wings, eliminating interference with the flaps. Braking was improved with a foot-operated brake linked to the rudder pedals.

Between April 1936 through May 1940 there were six Model 17 fatal accidents involving midair breakups that were attributed to weather conditions and structural failures, later determined to be caused by flutter of the ailerons and wings. The CAA Bureau of Safety Regulation initially issued an edict to restrict maximum airspeed and instrument flight, which was later replaced by a safety bulletin requiring lead balance weights to be added to the ailerons and flaps, and plywood panels to the outboard portion of the wings to increase torsional stiffness of the wing tip section.

Sales began slowly. The first Beech Staggerwings' high price tag (between US$14,000 and $17,000, depending on engine size) scared off potential buyers in an already depressed civil aircraft market. Only 18 Model 17s were sold during 1933, the first year of production, but sales steadily increased. Each Staggerwing was custom-built by hand. The luxurious cabin, trimmed in leather and mohair, held up to five passengers. Eventually, the Staggerwing captured a substantial share of the passenger aircraft market. By the start of World War II, Beechcraft had sold more than 424 Model 17s.

The Staggerwing's speed made it popular with 1930s air racers. An early version of the Model 17 won the 1933 Texaco Trophy Race. In 1935, a British diplomat, Capt. H.L. Farquhar, successfully flew around the world in a Model B17R, traveling 21,332 miles (34,331 kilometers) from New York to London, by way of Siberia, Southeast Asia, the Middle East, North Africa and back across Europe.

Louise Thaden and Blanche Noyes won the 1936 Bendix trophy in a Model C17R Staggerwing. Thaden also won the Harmon Trophy for her achievement. Jackie Cochran set a women's speed record of 203.9 mph, established an altitude record of over 30,000 feet, and finished third in the 1937 Bendix Trophy Race, all in a special Model D17W Staggerwing. The aircraft made an impressive showing in the 1938 Bendix race, as well. 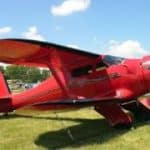 In 1970, due to a dispute with the T-6 racing class, the Reno National Air Races invited five Staggerwings to perform a demonstration race. Two G models and two D17 models raced. The five pilots were Bryant Morris, Bert Jensen, Don Clark, Noel Gourselle, and Phil Livingston, the only pilot to have prior racing experience in the T-6 class. The race was flawless with ABC Wide World of Sports coverage, but protesting T-6 racers prevented the class from future competition with allegations of safety issues.

As World War II loomed, a number of Model B17Ls were pressed into service as bombers by the FARE, the air forces of the Second Spanish Republic during the Spanish Civil War. China ordered a number of Staggerwings to use as ambulance planes in its fight against Imperial Japan. Finland had one C17L as a liaison aircraft between 1940–1945.[3] On October 2, 1941, Beech shipped a special camouflaged D17S to Prince Bernhard of Lippe, who was in exile in London after the German invasion of the Netherlands. He used it for refugee work in and around London. 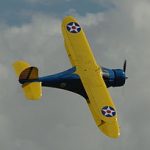 The Beech UC-43 Traveler was a slightly modified version of the Staggerwing. In late 1938, the United States Army Air Corps purchased three Model D17Ss to evaluate them for use as light liaison aircraft. These were designated YC-43 (Y designating a development aircraft or non-standard type, C standing for Cargo). After a short flight test program, the YC-43s went to Europe to serve as liaison aircraft with the air attachés in London, Paris, and Rome.

Early in World War II, the need for a compact executive-type transport or courier aircraft became apparent, and in 1942, the United States Army Air Forces ordered the first of 270 Model 17s for service within the United States and overseas as the UC-43 (USAAF designation for Utility, Cargo). These differed only in minor details from the commercial model. To meet urgent wartime needs, the government also purchased or leased (impressed) additional “Staggerwings” from private owners, including 118 more for the Army Air Force plus others for the United States Navy. In Navy service, the planes were designated as GB-1 and GB-2 (under USN designating convention signifying General (purpose), Beech, 1st or 2nd variant of type). The British Royal Air Force and Royal Navy acquired 106 “Traveller Mk. I” (the British name uses the UK double “l” spelling) through the Lend-Lease arrangement to fill its own critical need for light personnel transports.

The production UC-43 differed in minor details from the service test YC-43. Two distinguishing external features of the UC-43 are the circular automatic direction finder antennae mounted between the main landing gear and landing lights near the lower wingtips. They were all powered by the 450 horsepower (336 kilowatt) Pratt & Whitney R-985 engine.

After the war's end, Beech immediately converted its manufacturing capabilities back to civil aircraft production, making one final version of the Staggerwing, the Model G17S. They built 16 aircraft, which they sold for US$29,000 apiece. Norway sold one D17S to Finland in 1949, which the Finnish Air Force used from 1950 to 1958.

The lightweight V-tail Beechcraft Bonanza, a powerful four-passenger luxury aircraft, soon replaced the venerable Staggerwing in the Beech product line, at about a third of the price. The Bonanza was a smaller aircraft with fewer horsepower, but carried four people at a similar speed to the Staggerwing. Beechcraft sold the 785th and final Staggerwing in 1948 and delivered it in 1949.

In March 2003, Plane & Pilot magazine named the Staggerwing one of its Top Ten All-Time Favorite aircraft.

In the April 2007 issue of AOPA Pilot magazine, it was reported that the Staggerwing was voted by nearly 3000 AOPA members as the Most Beautiful Airplane. “Members said it's the perfect balance between ‘muscular strength and delicate grace,' and rated it highly for its ‘classic lines and symmetry.'”

The November 2012 issue of Aviation History magazine ranked the Staggerwing fifth in their top 12 list of the Worlds Most Beautiful Airplanes. Stating that “Some might think ‘the Stag' ungainly, backward wings and all, yet it has become the prime example of vintage beauty.” and “…the aftward upper wing led to the big, steeply raked windscreen that is also a key element of what some have called an art deco classic.”

20 built in licence production in Japan by Tachikawa, plus two assembled from imported parts for Dai Nihon Koku KK. Manshu, Chuka Koku and agencies such as provincial police headquarters.