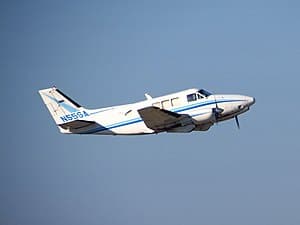 The Beech Queen Air (Models 65/70/80/88) is a twin-engine, piston aircraft with a retractable gear. The Beech Queen Air is a low-wing airplane produced by Beechcraft between the years 1960 and 1977. It seats up to 7 passengers and 1 pilot.

The Beechcraft Queen Air is a twin-engined light aircraft produced by Beechcraft in several versions from 1960 to 1978. Based upon the Twin Bonanza, with which it shared key components such as wings, engines, and tail surfaces, but featuring a larger fuselage, it served as the basis for the highly successful King Air series of turboprop aircraft. It is often used as a private aircraft, a utility, or a small commuter airliner. Production ran for 17 years.

The company's Twin Bonanza was reaching the limits of development so Beechcraft decided to develop a design with a larger fuselage and new tail which it designated the Beech 65. Early in development the United States Army which had been a customer of the Twin Bonanza (which it called the L-23 Seminole), ordered 68 aircraft under the designation L-23F. The prototype Beech 65 first flew on August 28, 1958.

The Model 65 received a Federal Aviation Authority type certificate on February 4, 1959 and the first deliveries were made soon after. On February 8, 1960 a Queen Air achieved a new height record of 34,862 feet.

The basic Model 65 was in production until 1967 when the improved Model A65 with a swept rather than vertical tail was introduced. Production continued with further variants introducing pressurization and turboprop engines.

Beech Queen Air 88 (1965-1969) Serial Numbers LP1 through LP47
Introduced in 1965 the model 88 is a pressurized version of the Queen Air. This aircraft featured round cabin windows that make the 88 look quite similar to a 90 series King Air. It also shares the engines and long wing of the B80. Sales were slack due to its higher sales price and lower useful load as compared to the B80. Only 47 examples were ever produced of which two were converted to King Air standard and the model 88 aircraft was removed from production in 1969. The first two models of the King Air's official designation were BE65-90 and BE65-A90 owing to its Queen Air heritage.

Beech Queen Air 65 Excalibur
This is a modification performed in the aftermarket by supplemental type certificates (STCs) to the BE65. It resolves the biggest issue of the Queen Air design, the engines. This is accomplished by replacing the rather cantankerous (if operated incorrectly) six-cylinder Lycoming IGSO-480s and Lycoming IGSO-540s, with the far more robust eight-cylinder Lycoming IO-720. This presents the major advantage of not having a gearbox or superchargers to cause maintenance and reliability problems. However the loss of the supercharger does limit the cruising altitude to below fifteen thousand feet. The other advantages gained are the overall increase in power to 400 hp (300 kW) per engine as well as a gross weight increase in most models. The gross weights are increased to 8,000 lb (3,600 kg) in all the short-wing aircraft (65, A65, 80), 8,200 lb (3,700 kg) in the 70, and 8800 in the other long-wing aircraft (A80, B80, 88). The US Army National Guard installed this modification on some of their aircraft. The Excalibur Queen Air can be recognized by the noticeably smaller engine cowlings and lower-set engines. This STC was originally designed and produced by Ed Swearingen who was well known for his work on the Twin Bonanza, Queen Air, and later Swearingen aircraft (Merlin and Metro). The ownership of this STC has changed hands many times over the years. The current owner is Bemidji Aviation which operates a fleet of Excalibur Queen Airs as well as other aircraft in the charter and freight role in the upper mid-west of the United States.