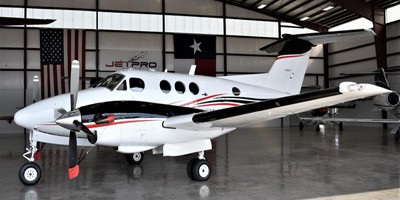 The Beech King Air F90-1 is a pressurized, twin-engine turboprop business aircraft configured as a cantilever low-wing aircraft with a T-Tail. It has retractable gear and was produced by Beechcraft between the years 1983 and 1985 during which time 33 aircraft were manufactured, serial numbers LA202, 205 through LA236.

The King Air F90-1 can accomodate up to eight passengers, although it is more commonly configured for six passengers, with four seats arranged in a club, one seat across from the door, and a belted lavatory seat. An airstair door is located aft of the wing on the port side of the fuselage and the baggage compartment is in the aft cabin beyond the lavatory.

Further refinement of the 90 series resulted in the Model F90 and follow-on Model F90-1. The F-models featured the T-tail of the Model 200 King Air mated to the fuselage and wings of the E90, with PT6A-135 engines of 750 shp (560 kW) driving four-bladed propellers.The F90 prototype flew on January 16, 1978 and 203 production versions followed between 1979 and 1983, when the F90 was superseded by the F90-1. The F90 prototype was re-engined with Garrett AiResearch TPE-331 engines to test the feasibility of a Model G90, but this model was not put into production.

Deliveries of the F90 began in mid-1979 and continued through 1983, when the F90-1 was introduced. The F90-1 features PT6A-135A engines, which provide improved performance compared to the PT6A-135 that powers the F90. While both powerplants are flat-rated to 750 shaft horsepower, the -135A offers 885 shaft horsepower at max takeoff power, compared to 850 shaft horsepower for the -135. The F90-1 also has redesigned low-drag cowlings. A Collins avionics package, including the APS-80 autopilot, was standard equipment.