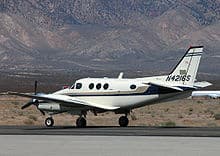 The Beech King Air E90 is a pressurized, twin-engine turboprop business aircraft configured as a cantilever low-wing aircraft with a conventional tail. It has hydraulically-actuated, retractable landing gear and full feathering, reversible three-blade propellors. It was produced by Beechcraft between the years 1972 and 1981 during which time 347 aircraft were manufactured, serial numbers LW1 through LW347.

The King Air E90 is found in a variety of passenger configurations seating up to 5 passengers and 1 pilot. A typical executive congfiguration being a four-place club, a seat across from the airstair door, and a belted lavatory seat. The aft cabin/lavatory has a small baggage storage area.

Following the C90, Beechcraft moved onto the King Air E90 after a D90 prototype was abandoned. The E90 is simply a more powerful version of the C90. The two models were produced in parallel, with the E90’s major difference being upgraded PT6A-28 engines that give the aircraft a further range, faster cruise speed and better takeoff performance. It also has a slightly modified wing.