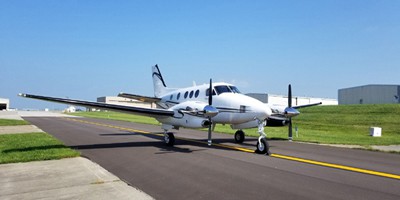 The Beech King Air C90-1 is a pressurized, twin-engine turboprop business aircraft configured as a cantilever low-wing aircraft with a conventional tail. It has retractable landing gear and three-blade propellors. The Model C90-1 was produced by Beechcraft between the years 1982 and 1983 during which time 54 aircraft were manufactured, serial numbers LJ986, 996, 1011 through LJ1062.

The King Air C90-1 is found in a variety of passenger configurations seating up to 5 passengers and 1 pilot. A typical executive configuration being a four-place club, a seat across from the airstair door, and a belted lavatory seat. The aft cabin/lavatory has a small baggage storage area.

Model C90-1 entered production in 1982 after 507 C90s had been built. It was the same as the C90 except it incorporated a stronger horizontal stabilizer similar to the E90. It included improvements to the pressurization system which was increased to 5.0 psid providing a cabin altitude of 6,000 ft at 20,000 ft and 12,000 ft cabin altitude at 30,000.

The C90-1 had the same PT6A-21 engines as the earlier C90 models, but bumped up the engine ITT from 635° to 680°, increasing cruise speeds by more than 15 knots to 237 KTAS. It featured a stronger King Air 200 type air-stair cabin door and double-pane side windows were added to accommodate an increased cabin pressure differential of 5.0 PSID.