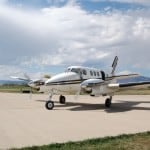 The Beech King Air 90 Model is a pressurized, twin-engine turboprop business aircraft configured as a cantilever low-wing aircraft with a conventional tail. It has retractable landing gear and constant speed propellors. The 90 King Air was produced by Beechcraft between 1964 and 1966, serial numbers LJ1 through LJ113

The King Air 90 is found in a variety of passenger configurations seating up to 9 passengers and 1 pilot.

Performance specifications on Beech B90

The Model 90 King Air was conceived as the Model 120 in 1961. In May 1963, Beechcraft began test flights of the proof-of-concept Model 87, a modified Queen Air with Pratt & Whitney Canada PT6A-6 engines. After 10 months of test flying the “proof-of-concept” King Air 87, the Model 87 was delivered to the United States Army as the NU-8F. The first production aircraft was delivered on October 8, and by the end of the month, 152 aircraft had been ordered; by year's end, seven had been built.

On July 14, Beech announced a new type, and a month later began accepting orders for the “King Air”, with deliveries to commence in Autumn 1964. On January 24, 1964, the first definitive prototype, by now designated Model 65-90 and also fitted with PT6A-6 engines, flew for the first time. The first production 65-90 was delivered in October of the same year. The PT6A-6 did not have a reverse-pitch prop. Over time, both the engine and the powerplant grew.

“Proof-of-concept” test aircraft based on the Model A80 with PT6A-6 turboprops; one built.