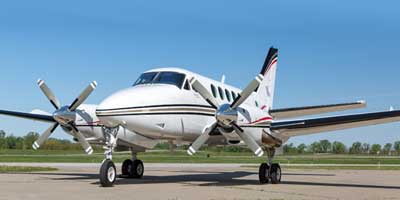 The Beech King Air 100 was produced by Beechcraft between the years 1969 and 1983, Serial numbers B2 through B89,93. It is a twin-engine turboprop aircraft configured as a cantilever low-wing aircraft with a conventional Tail. Pressurization, retractable landing gear and constant-speed, auto feathering, reversible propellers are features of the Model 100. A combination of configurations are available with club and divan seating, but seating for eight passengers and 1 pilot is most common.

Next in the series was the B100, which featured 715 shp Garrett AiResearch TPE-331 engines as an alternative to the Pratt & Whitneys offered on other King Airs, and another increase in MTOW to 11,800 lb (5,350 kg). Model B100 was introduced in 1976 and was produced concurrently with the Model A100 for several years; manufacture ceased in 1983 after 137 were built. Beech developed the Model 200 Super King Air was from the Model 100, with the same fuselage design (with some differences, mainly associated with the different tails) being used for both models. The Model 200 had different wings and a T-tail and entered service in 1974.

Beech King Air A100-1
Designation for procurement reasons of three Model 200 battlefield surveillance variants for the United States Army as the RU-21J.