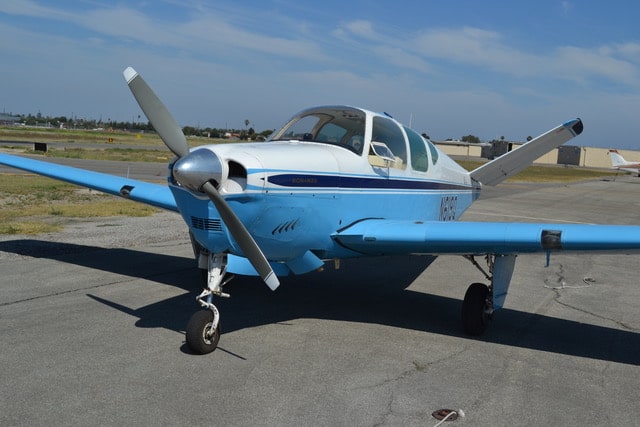 It is a single-engine, piston aircraft configured as a cantilever low-wing aircraft with a V-tail. Distinguishing features are: retractable landing gear,  variable pitch propeller. Model J35 Bonanza seats up to 4 passengers and 1 pilot.

The 1958 Beech J35 featured a V-tail design, giving the plane a distinctive appearance. The V-tail design reduced the number of flying surfaces from three to two, as compared to a standard, straight-tail plane. It was thought this design would also reduce drag, weight and production costs. It was the first fuel injected Bonanza. The plane featured two small rear windows, long-chord stabilators and a single, throw-over yoke control. The plane sported optional in-wing auxiliary tanks (20 gal. total), an auxiliary fuel pump, and vernier engine controls. Among other changes was a separate gauge for auxiliary tanks due to mismanagement of fuel accidents. The gear handle was positioned on the right-side of the cockpit and the flap control was on the left. The J35 used “sight and touch” gear and flap control technology. It also sported stowable copilot rudder pedals when no copilot brakes are installed.