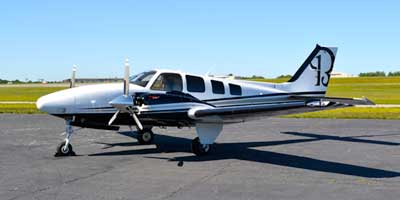 It is a twin-engine, piston aircraft configured as a cantilever low-wing aircraft with a conventional tail. Distinguishing features are: retractable landing gear, variable pitch propellers. Model 58 Baron seats up to 5 passengers and 1 pilot.

Introduced for the model year 1969, the larger, more powerful Baron 58 was developed from the Baron 55, introducing club seating, double aft baggage doors, and new gross weight of 5,400 lbs. The earlier Baron 58 was fitted with the Continental IO-520 285 hp engine. The Baron 58 can cruise at 200 knots (370 km/h) at 7000 ft (2100 m). The lengthening of the fuselage increased rear baggage space, as well as providing more comfortable six-place seating over the Baron 55 and 56TC. ICAO type designator of all versions is BE58.

A big change in panel/system layout on 58/58TC/58P and engines occurred in 1984. The new compact panel included relocating throttle, gear, flap, propeller and mixture controls to industry-standard positions to resemble the King Air panel. The engine was upgraded to a Continental IO-550 300-hp engine.

The current production version is the G58, featuring a glass cockpit, improved passenger cabin and changes to selected airframe details.

The new interiors, which are available for both the Baron and Bonanza, were announced in September 2011 and phased into production in the second quarter of 2012. The upgraded styling was inspired by interiors of prestige cars, and built to improve cabin comfort and functionality.

The G58 upgrade encompasses a new air conditioning and automatic climate control system, which is approved for operation in all phases of flight, including take-off. The condenser and evaporator and has a “set and forget” feature allowing the operator to select the desired cabin temperature that will be automatically maintained by an Electronic Control Unit.

All external lights on the aircraft utilize LED bulbs which have no glass filament to break, so they are shock and vibration resistant while consuming significantly less energy. The solid state LED light lasts more than 8000 hours, greatly reducing operational costs.