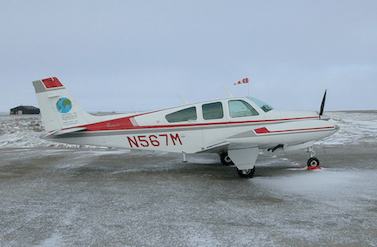 The Beech 33 Bonanza was manufactured from 1968 until 1972, serial number CD1119 through CD1299. It is a single-engine, piston aircraft configured as a cantilever low-wing aircraft with a conventional tail. Distinguishing features are: retractable landing gear, constant-speed propeller. Model 33 Debonair seats up to 3 passengers and 1 pilot.

The Debonair name was dropped in 1967 and the subsequent aircraft, now a part of the Bonanza family, were simply designated E33, F33 and G33. During these years all model numbers ending in “A” featured the 285- hp Continental. All others retained the 225-hp engine. In 1972, the G33 was introduced with a 260-hp Continental.

This is the same year Beech introduced the six-place Model 36 Bonanza. The 1968 Model 33 was a C33 with improved Bonanza trim, and the name was changed from Debonair to Bonanza. The engine was a Continental 225 HP version.  they extended the windshield, giving it a greater slope and made the longer third window standard equipment, rather than an option. There were 116 E33s produced.

The F33, last of the 225 HP Bonanza 33s, was introduced in 1970 and lasted only a year, with 20 built. The 1970 Model F33 Bonanza was actually a refined Model E33, still using the Continental IO-470-K of 225 hp. F33 had restyled third cabin window of the Model V35B, “Speed Sweep” windshield, three gear down annunciator lights, redesigned sub panels and switches, a lower glare shield and Hartwell quick-opening latches for the engine cowling.

1971 model year. Beech Aircraft offered a short- and long-fuselage option and 26 of the former were built compared with 34 of the latter.

The G33 was built in 1972 and 1973. It had a 260 HP Continental IO-470-N. The G33 Bonanza seats up to 4 passengers plus 1 pilot. With the bigger engine came an all-new, roomier interior and new instrument panel which gave it all the other appointments given the “real” Bonanzas. Beechcraft decided it didn’t make sense to be producing two airplanes which were so similar in every way, including price. A total of 44 were built.