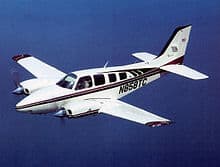 It is a twin-engine, piston aircraft configured as a cantilever low-wing aircraft with a conventional tail. Distinguishing features are: retractable landing gear, variable pitch propellers. Model 58TC Baron seats up to 5 passengers and 1 pilot.

A big change in panel/system layout on 58/58TC/58P occurred in 1984, including relocating throttle, gear, flap, propeller and mixture controls to industry-standard positions.

In the wake of the Model 58’s success, in 1976 Beech Aircraft introduced the six-place, turbocharged Model 58TC, priced at $170,750 (before options). The chief modification was trading the Continental IO-520-C engines for the six-cylinder, turbosupercharged, injected, opposed (TSIO) Continental IO-520-L powerplants each rated at 310 horsepower at 2,600 RPM. Each engine was equipped with three-blade propellers featuring constant-speed operation and full-feathering capability. First flight of a pre-production airplane occurred on October 31, 1975.

Long-time Beechcraft salesman and historian Larry A. Ball maintained that the 58TC was “probably certified and offered on the market for only two reasons. First, the engine installation already was under development for the pressurized Model 58P, and second, competitors Piper Aircraft Corporation and Cessna Aircraft Company were offering unpressurized, turbocharged airplanes” (such as the Piper Aztec F and Cessna Model 402, respectively).

Unfortunately, the 58TC failed to achieve the popularity of the Baron 58 series and “never enjoyed wide acceptance,” Ball said. During nine years of production only 151 were built, but a 1977 Model 58TC did achieve some degree of fame when it became the 40,000th Beechcraft manufactured since the Model 17R cabin biplane of 1932.4

For the 1976 model year, Beechcrafters built 34 examples of the 58TC beginning with serial number TK-1. The 1977 version remained unchanged, and 26 units were manufactured followed in 1978 by 24 units. Polyurethane paint became standard on the 1979 58TC that also featured more powerful Continental TSIO-520-WB engines, each rated at 325 horsepower (possibly in response to Cessna’s 1979 Model 402C upgrade that included Continental TSIO-520-VB engines each rated at 325 horsepower). Standard-equipped price increased to $206,650, and only 25 airplanes were built that year.

From the 1980 model year to 1984 only 42 of the turbosupercharged Beechcrafts were built, including four in 1982 and one each in 1983-1984. The final Model 58TC built was serial number TK-151 that was the only 58TC to have the new, dual-control installation and new instrument panel design that also was used in the Model 58 and 58P. When the last 58TC rolled off the assembly line, base price had risen to $284,500 compared to $170,750 for the first production 58TC.(excerpts from King Air magazine)